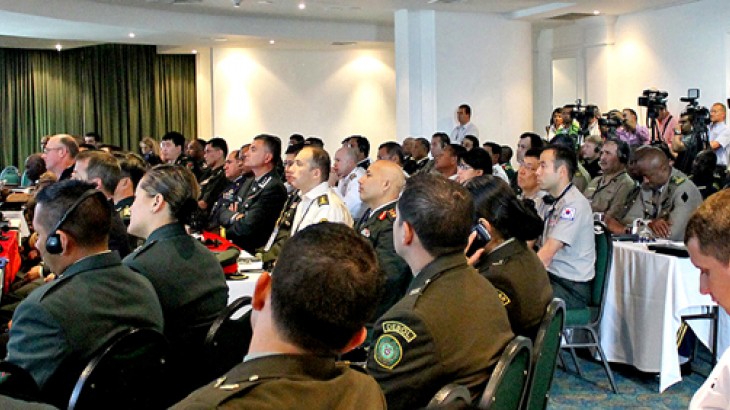 For the past ten years the International Committee of the Red Cross (ICRC) has conducted the Senior Workshop on International Rules governing Military Operations (SWIRMO). In 2017 the SWIRMO will be held in Mexico City, Mexico from 16 – 21 October.

Participants to SWIRMO are senior military officers holding a rank between colonel and brigadier general, with recent command or staff experience in an operational environment. The workshop proceeds on the assumption that participants have at least a basic understanding of the law of armed conflict, and have received some formal training in this domain during their careers. The workshop is taught by serving senior military experts in four languages: English, French, Russian and Spanish.

SWIRMO has brought together senior military officers from around the world to share views and experiences on the international legal framework applicable to modern military operations. The workshop provides participants with the tools necessary to integrate those laws into the most relevant aspects of their national doctrine, education, field training and military disciplinary systems, thereby encouraging legally compliant behaviour across the entire spectrum of military operations. As a result, SWIRMO has become an important annual event, jointly hosted by the ICRC and a partner national defence force.

By gathering more than seventy senior operational officers to focus on the application of the law of armed conflict and human rights law, SWIRMO benefits from a unique dynamic where experiences can be shared in a truly international environment, allowing participants to broaden their views on the application of the law in a practical operational context. Beyond developing a deeper understanding of the most pressing international legal issues of the day, the workshop highlights the need to integrate relevant legal considerations into operational practice.
The distribution of costs and responsibilities for SWIRMO 2017 are set out in a Memorandum concluded between the ICRC and the Mexican authorities.