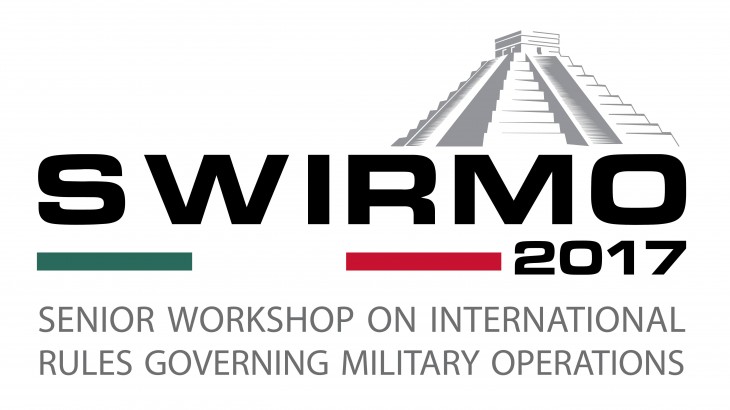 From October 16 to 21, 2017, Mexico will host the 11th edition of the Senior Workshop on International Rules governing Military Operations (SWIRMO). The event, organized by the International Committee of the Red Cross (ICRC) and the Mexican Secretariat of National Defense (SEDENA), provides a platform for senior officials from participating countries to share experiences and address issues related to the international legal framework applicable to contemporary military operations.

What is the SWIRMO event?

Participants to SWIRMO are senior military officers holding a rank between colonel and brigadier general, with recent command or staff experience in an operational environment. The workshop proceeds on the assumption that participants have at least a basic understanding of the law of armed conflict, international humanitarian law (IHL), and have received some formal training in this domain during their careers. The workshop is taught by serving senior military experts in four languages: English, French, Russian and Spanish.

SWIRMO has brought together senior military officers from around the world to share views and experiences on the international legal framework applicable to modern military operations. The workshop provides participants with the tools necessary to integrate those laws into the most relevant aspects of their national doctrine, education, field training and military disciplinary systems, thereby encouraging legally compliant behaviour across the entire spectrum of military operations. As a result, SWIRMO has become an important annual event, jointly hosted by the ICRC and a partner national defence force.

This year the SWIRMO event will have nearly 80 participants representing more than 70 countries and international organizations.

Why is the 2017 edition of SWIRMO being hosted in Mexico?

SWIRMO has been held annually since 2007. The idea of hosting it in Mexico arose two years ago during a meeting between the Mexican Secretary of National Defense, General Salvador Cienfuegos Zepeda, and the ICRC President, Peter Maurer. Mexico and the ICRC share positions on the implementation of IHL and its promotion in international fora, as well as humanitarian concerns that have intensified in recent years.

In addition, officials from the Mexican Secretariat of National Defense have recently participated in training workshops focused on internationally recognized standards governing the use of force in law enforcement operations.

What are the main objectives of the workshop?

SWIRMO seeks to ensure that international humanitarian law (IHL, the legal framework that applies to armed conflict) and the internationally recognized standards and principles governing the use of force in law enforcement operations are better integrated into military institutions. We cannot ignore the fact that today many people protected by IHL and / or human rights law are victims, both in armed conflicts and in other situations of violence. This is a central theme that the ICRC emphasizes during SWIRMO.

The ICRC supports armed forces to fulfill their legal obligations by applying them in operational practice. This can be achieved through a bilateral and confidential dialogue, both with arms bearers and with the authorities that may be involved in particular humanitarian actions.

What is the benefit of bringing together senior officials from so many countries and international organizations?

The dynamics of SWIRMO include (1) recaps on the international law of armed conflicts, (2) exercises in decision-making processes, and (3) discussion forums. In this way, SWIRMO is a unique opportunity to share experiences on good practices focused on implementing the rules of international law applicable during military operations, and to encourage them to be respected.

Why is the ICRC interested in the rules governing military operations?

The mandate of the ICRC is defined in the four 1949 Geneva Conventions, to which all States are party. Basically, this mandate can be summed up in providing protection and assistance to victims of armed conflict. That same mandate implies acting as guardian and promoter of IHL. The armed forces of contracting countries and non-state armed groups involved in armed conflicts have an obligation to comply with this legal framework.

In other situations of violence, which are not classified as an armed conflict, it is human rights that protect people and their property. The ICRC also promotes internationally recognized standards and principles governing the use of force in law enforcement operations in order to respect the lives and dignity of all.

Is this the first time that an event like SWIRMO is celebrated in Latin America?

No, the first time the SWIRMO workshop was held in Latin America was in Cartagena, Colombia, in 2013.

What can SWIRMO 2017 participants expect?

By gathering more than seventy senior operational officers to focus on the application of the law of armed conflict and international human rights law, SWIRMO benefits from a unique dynamic where experiences can be shared in a truly international environment, allowing participants to broaden their views on the application of the law in a practical operational context. Beyond developing a deeper understanding of the most pressing international legal issues of the day, the workshop highlights the need to integrate relevant legal considerations into operational practice.

Finally, will ICRC President Peter Maurer participate in SWIRMO 2017, and what will be his contribution to the event?

President Maurer will participate in a panel of speakers for a debate focused on the challenges of the application of IHL in contemporary conflicts. Three high-level officials, one from Europe, one from Latin America and one from Africa, will accompany Peter Maurer on this panel and share their recent experiences in command of operational units. This panel within the event is integrated into the SWIRMO program for the first time this year. After the conference, the ICRC president will take advantage of informal meetings with workshop participants.