Moscow Humanitarium: in dialogue with Russian officials and experts on de-escalation zones in Syria 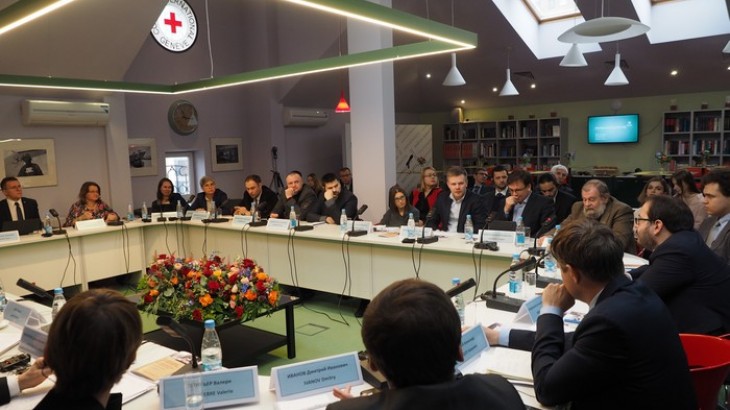 The May 2017 Astana Memorandum, which created the de-escalation zones in Syria, included the improvement of the humanitarian situation as one of its main goals. In an effort to better understand how to achieve that goal, on 15 November 2017, the International Committee of the Red Cross (ICRC), in cooperation with the Russian International Affairs Council (RIAC), held one-day consultations in Moscow dedicated to the potential humanitarian impact of de-escalation zones in Syria.

The round table was a closed-door, Chatham House Rule dialogue that created a constructive atmosphere for an open discussion with representatives from various Russian ministries, governmental agencies and MPs, as well as Russian foreign policy experts who specialise on Syria. The ICRC was represented by specialists in law, policy and protection, including a colleague working on the ground in Syria.

The discussion focused around various aspects of de-escalation zones, humanitarian assistance and protection concerns participants have regarding the zones, as well as the role and responsibilities of States and humanitarian organisations. The participants unanimously underlined that people in need within such zones, as outside of them, must be provided with humanitarian assistance and protection. They agreed that resident population should be protected against the effects of hostilities and other forms of violence. Furthermore, sustained freedom of movement of the civilian population, livelihood autonomy are a must.Tripartite ceasefire monitoring in the zones, carried out by the guarantor States, can help ensure the stable decrease of violence, which in turn could improve the humanitarian situation on the ground.

De-escalation zones, a creation specific to Syria, is at its early stage and is yet to show the potential outcomes.

De-escalation zones, a creation specific to Syria, is at its early stage and is yet to show the potential outcomes. As for the ICRC, it has a long history of working around the world in a variety of armed conflicts and other situations of armed violence. In sharing its previous experiences, the ICRC highlighted its modalities of work, including how it has operated in other types of zones. It specifically mentioned the safety and security of its staff, the need for unimpeded access, importance of conducting humanitarian needs assessment, requirement to have the explicit consent of all parties to the conflict, among others.

De-escalation zones do not cover the whole territory of Syria, and humanitarian needs are shared by people inside and outside these zones. With the conflict still ongoing, the enormous needs of all those affected by the conflict will not disappear. No single entity can handle the response: we need coordination between States and humanitarian organisations to ensure that the Syrian people have access to basic services in a safe and dignified manner.

While the event has provided an opportunity to share ideas and views in an open and honest manner, participants suggested having further dialogue regarding the aspects of concern around de-escalation zones, which could not be fully tackled during that one day. The consultations ended with a mutual understanding that further discussions between the ICRC and the Russian authorities are needed.

The ICRC and RIAC will also produce a report based on the consultations held, including humanitarian concerns and recommendations for improving the humanitarian situation in and around the de-escalation zones.