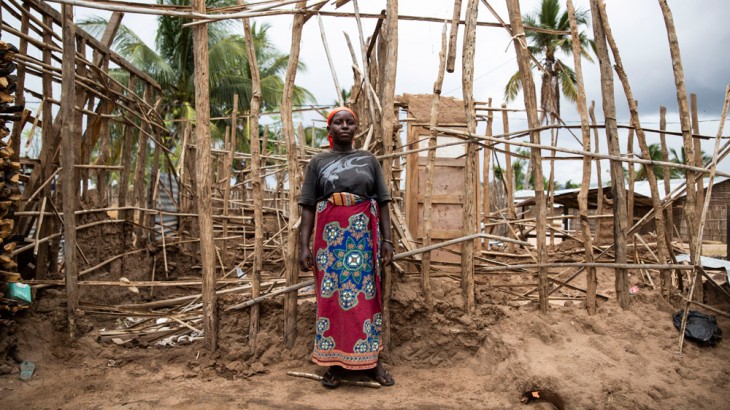 Albertina Clemente stands in front of the ruins of her cyclone-destroyed home in Macomia in the northern Mozambican province of Cabo Delgado. She is among the many being affected by armed violence in northern Mozambique. Attacks on villages have been recurrent in Cabo Delgado since 2017. Photo: Crystal Wells/ICRC

Pretoria/Geneva (ICRC) – Armed violence in Mozambique's northernmost province Cabo Delgado is forcing scores of people from their homes, destroying villages and health centres, and making it difficult for families to recover from Cyclone Kenneth, which hit the area in April 2019.

Attacks on Mozambicans have been recurrent in Cabo Delgado since 2017. The International Committee of the Red Cross (ICRC) is concerned about the impact of the armed violence on displaced Mozambicans and their host communities, should this pattern continue.

"People in Cabo Delgado are suffering from two disasters: a cyclone, which wiped out homes and crops earlier this year, and armed violence," said Patricia Danzi, ICRC's regional director for Africa. "People have suffered two years of attacks on their villages, which has forced many to leave their houses and most of their belongings behind."

In the last two years, hundreds of people have been wounded and killed, homes burned down, and property looted. Safe access to affected communities is a challenge for humanitarian organisations like the ICRC, making the real scale of the needs hard to determine.

"The humanitarian community has problems accessing all of the areas in the province," said Danzi. "Armed violence prevents us and others from going anywhere, anytime. The same goes for the people. If they don't feel safe to move to places where they can access basic services, they will not go. The true scale of the people affected is still unknown."

More people are seeking refuge in the relative safety of larger towns such as Macomia, putting a strain on already scarce resources. Most of those displaced by the armed violence are living with local families, who are generously sharing their homes and what resources they have. Others are sleeping in what open spaces they can find such as empty classrooms.

"I was a merchant, doing my business at a small shop," said Maquela Salimane, who fled his village with his wife and four children and is now living with another family in Macomia town. "But as soon as the [armed men] came in, they burned my shop and all my belongings. The clothes I am wearing are the only ones I have."

The armed violence is also affecting people's ability to feed their families. Farmers are abandoning their fields outside larger towns like Macomia for fear they will be attacked. This comes after losing their previous harvest to Cyclone Kenneth, leaving many families with little to eat and limited options to earn a living.

Albertina Clemente, who lost her home in Cyclone Kenneth, said: "The attacks are frequent. We live in fear. We cannot sleep. Just yesterday we heard gunshots and some of us ran away to sleep in the bush."

The ICRC started to work in Cabo Delgado in 2018 and has since worked with the International Federation of Red Cross and Red Crescent Societies and the Mozambique Red Cross to provide seeds, farming tools, and other relief items to families in the aftermath of Cyclone Kenneth. It also reconstructed the maternity hospital in Macomia town after it was destroyed in the storm and is rehabilitating the local water system. However, this is just skimming the surface of the real needs.

"People have the double impact of the armed violence and the cyclone, which tore through the province at the beginning of the year, destroying many of the assets people had," said Danzi. "It adds on top of what they have to do. They have to rebuild their lives twice."