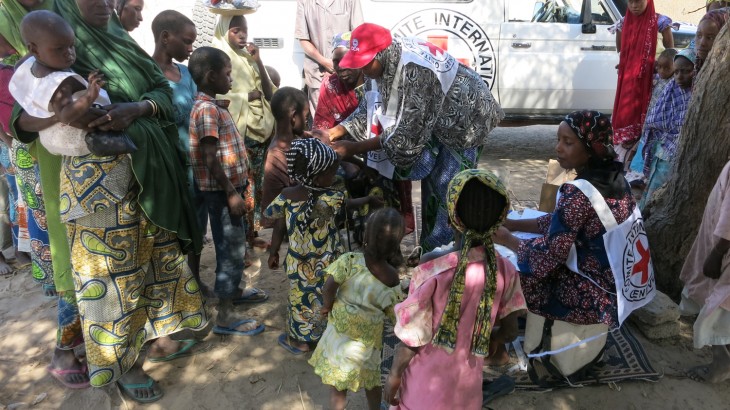 Bosso Health Centre, Diffa region, Niger, November 2014. A nurse vaccinates a child against measles. The ICRC has funded the vaccination of 30,000 children (both displaced and resident) against measles in Bosso department. [CC BY-NC-ND / ICRC / H. Oumarou]

Over the past three months, more than 25,000 people (residents, displaced people and returnees) have been aided by the ICRC, which worked closely with the Red Cross Society of Niger to deliver food aid for nearly 45,000 individuals in 2014. Of these, some 11,000 also received essential household items (blankets, tarpaulins, mosquito nets, mats, clothes and kitchen utensils).

"In addition to caring for wounded people, we urgently need to provide food, drinking water and basic household items to the thousands – mostly women and children – who continue to flee the violence," explained Loukas Petridis, head of the ICRC delegation in Niger.

Food and other relief for displaced people and residents

The clashes and resulting poor security have nearly emptied border towns and villages in north-eastern Nigeria, as people have fled to Niger. "Unlike previous waves of displaced people, those arriving today seem determined to stay longer in Niger," said Yssouf Koné, head of the ICRC sub-delegation in Diffa. The situation was a matter of concern to the Red Cross, he added, because the longer the displaced stayed, the greater the pressure on host communities and resources in an area already reeling from the drastic slowdown in trade with Nigeria and from a very poor farming and herding season. 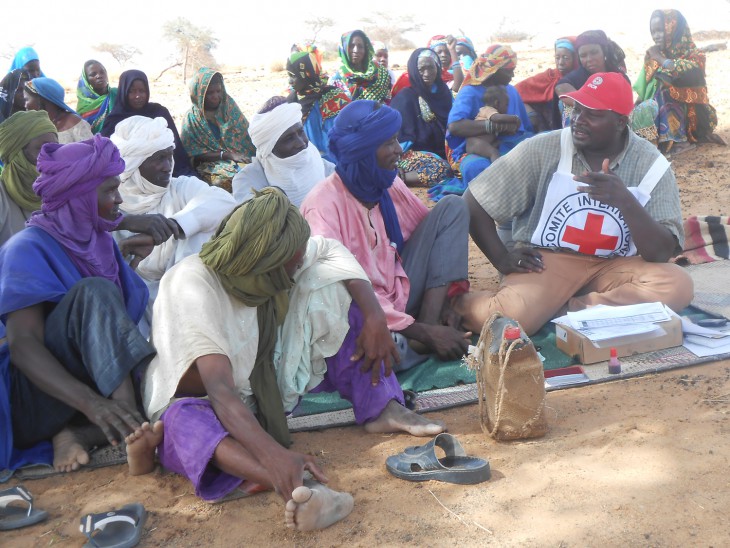 In the municipalities of Bosso (particularly on islands in Lake Chad), Diffa, Gueskérou, Chétimari, Kabléwa and N'guigmi, the ICRC and the Niger Red Cross are assisting people who have fled the conflict, as well as some particularly vulnerable host communities.

Nearly 5,000 people, including over a thousand residents, recently received food aid in N'guigmi and Kabléwa. More than 200 displaced families were also given other essential items.

The plight of displaced people on Lake Chad islands remains of particular concern. Access is still a problem, with logistical challenges and security considerations preventing humanitarian workers from reaching all those in need. In late October 2014, the ICRC and the Niger Red Cross distributed food to almost 3,000 people on the islands of Atchabassonori, Kwikléwa, Ali Mandoula, Gadira, Kandahar Hamidou, Kandahar Yacine, and Kachimba.

Treating the wounded and improving access to health care, water and sanitation

Over the past three months, some 50 wounded people have received care at the Diffa regional hospital and the Bosso integrated health centre, two facilities supported by the ICRC. An ICRC surgical team spent three weeks at the Diffa hospital, which also received a fresh delivery of medical supplies, in order to enhance the staff's technical skills and help treat the wounded. The team mainly worked with the hospital's surgical department on surgical techniques, monitoring of patients, and the ICRC's guidelines on treating gunshot wounds.

The large number of displaced people living in the Diffa area and the very difficult conditions they face increase the risk of epidemics. To minimize that risk, the ICRC has funded a measles-vaccination campaign in Bosso department (Bandi, Baroua, Bosso, Dagaya and Toumour), where many of the displaced are living. In total, nearly 30,000 children between nine months and 14 years of age, and mainly from displaced families, have been immunized against measles. 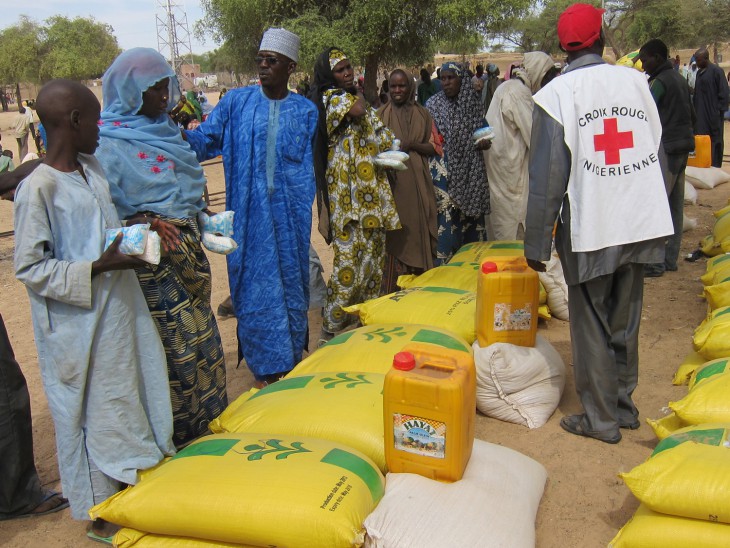 In Bosso, the proximity of the Yobe river, an arm of Lake Chad, aggravates health risks because the water from boreholes in the area has a particularly high iron content and, put off by its reddish colour, people sometimes prefer to get their water directly from the lake, despite the health threats. After consulting with the local population and authorities, the ICRC engineers reconnected the network supplying the city of Bosso to the N'Gouba borehole, 13 kilometres away, where the water is of much better quality. They also repaired the borehole. A water-hygiene awareness campaign was then conducted and followed by the distribution of 850 cans for the collection and storage of household water. Meanwhile, Garin Dogo (in Gueskérou municipality) had no functioning modern water point, whereas the village's population had doubled with the influx of displaced people. The ICRC has therefore installed a high-capacity water point there, equipped with a 30,000-litre tank and four standpipes. Around 6,000 people (displaced people and residents alike) will thus have access to drinking water.

In the Diffa area over the past year, the ICRC has sunk or repaired 10 boreholes fitted with hand pumps, two artesian boreholes, a high-capacity water-supply system and a well.

"We are very concerned about the number of displaced people arriving in recent weeks and above all about their extreme vulnerability," Petridis said. "Some are wounded, some sick, some have lost contact with their families. Most have been directly affected by the violence and have lost their belongings and their livelihoods." More than ever, the International Red Cross and Red Crescent Movement remains poised to come to the aid of people fleeing the violence in north-eastern Nigeria.