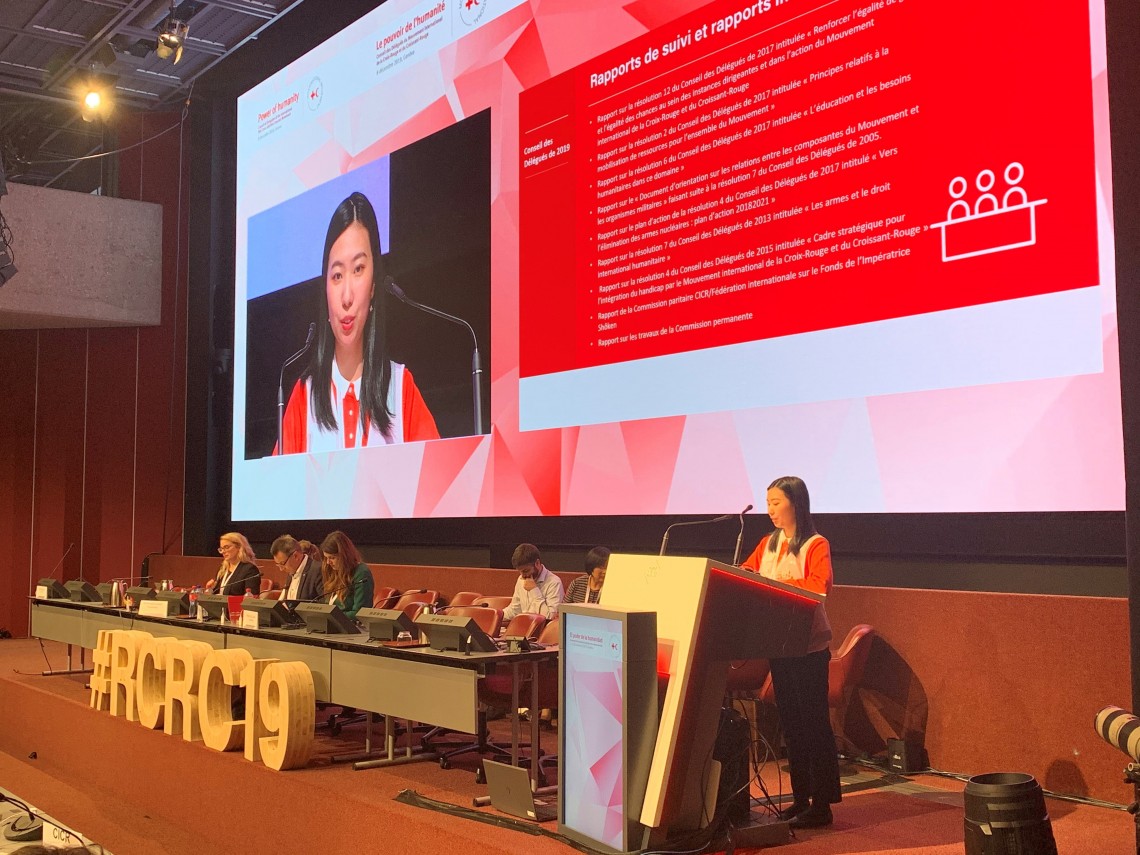 Nuclear weapons: An appeal for humanity

Appeal on nuclear weapons delivered at the Council of Delegates of the Red Cross and Red Crescent on 8 December 2019 by Haruka Adachi of the Japanese Red Cross Youth.
Statement 09 December 2019

Seventy four years after the world witnessed the unspeakable suffering caused by the atomic bombings of Hiroshima and Nagasaki, nearly 14,000 nuclear weapons are still in existence, many on hair-trigger alert, ready to be launched within minutes. We, the components of the International Red Cross and Red Crescent Movement, are deeply concerned at the existential threat nuclear weapons pose to humanity.

In 1945, our Movement witnessed the devastation caused by nuclear weapons. We saw these weapons incinerate two cities, instantly killing tens of thousands of people. We have listened to the horrific testimony of the survivors, the hibakusha.

Since then, we have learned that even a limited exchange of nuclear weapons in the future would have catastrophic and long-lasting consequences on human health, the environment, the climate, food production and socioeconomic development. We know that any use of nuclear weapons would cause insurmountable challenges for humanitarian assistance and that adequate assistance capacities do not exist at national or international levels.

Indeed, nuclear weapons are inherently incompatible with the very fabric of humanity and would render our efforts to prevent and alleviate human suffering, in accordance with our mandate, impossible.

The indisputable evidence of nuclear weapons' indiscriminate catastrophic humanitarian consequences makes it extremely doubtful that their use could ever comply with international humanitarian law.

The Geneva Conventions were adopted 70 years ago to protect people from the worst excesses of war. Yet the continued existence of nuclear weapons and recurrent threats of their use render ongoing conflicts significantly more dangerous and increase the risk of a global catastrophe from which there would be no protection.

We call on all States and national leaders to ensure that nuclear weapons are never again used and without delay to:

• sign and ratify the 2017 Treaty on the Prohibition of Nuclear Weapons as a crucial instrument of international humanitarian law, a further disincentive for nuclear proliferation and an essential building block towards a world free of nuclear weapons
• adhere to and fully implement the Treaty on the Non-Proliferation of Nuclear Weapons (NPT), the Comprehensive Nuclear-Test-Ban Treaty and regional nuclear-weapon-free-zone treaties, as applicable
• take concrete and immediate measures, in line with their existing commitments and obligations, to reduce the risk of nuclear weapons' use, whether by intent, miscalculation or accident
• use the 2020 NPT Review Conference as a critical opportunity to make progress towards all of these goals.

The NPT's entry into force 50 years ago put States under a legal obligation to move resolutely towards a world without nuclear weapons. It is high time to fulfil this vital promise to future generations and bring the era of nuclear weapons to an end.