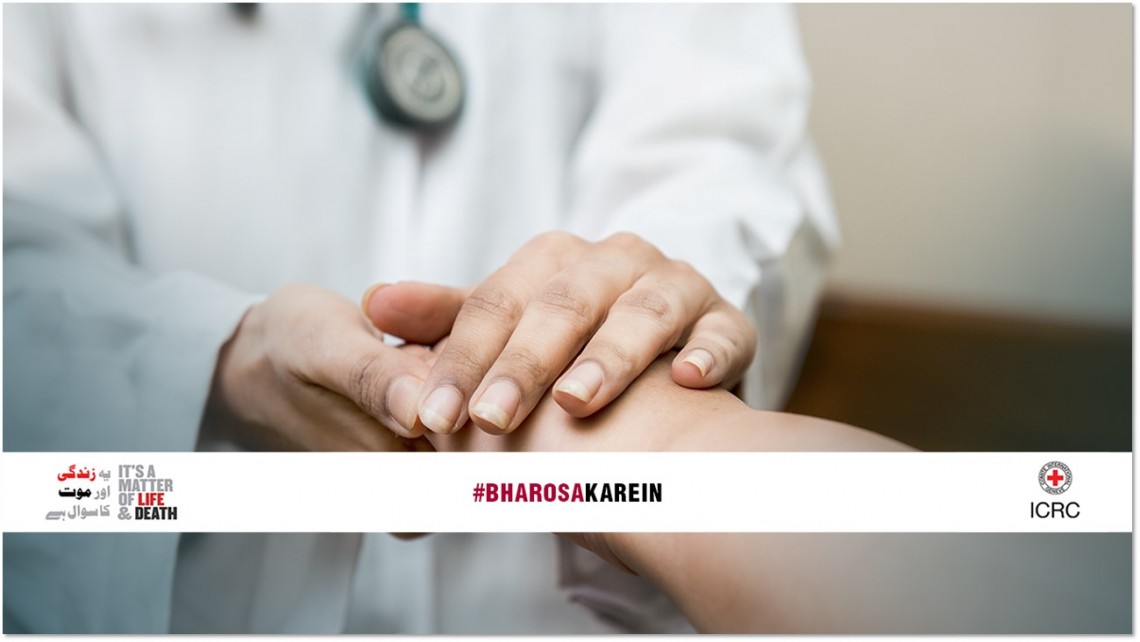 The lives and well-being of hundreds of people are put in jeopardy each time a health-care worker is attacked to vent anger or any medical facility is used as an easy and identifiable target in conflict. Loss of life due to lack of medical attention, unchecked spread of diseases and suspension of eradication drives are some of the costs that entire communities pay due to violence against health care. Focusing on this ripple effect, the International Committee of the Red Cross (ICRC), with the support of the Pakistan Red Crescent and other local partners, has launched a nationwide campaign called Bharosa Karein to promote respect for health workers and facilities in the country.

More than 200 people, representing the government, health-care sector, media and general public, gathered for the campaign's launch held recently. Bharosa Karein, which translates as "trust them", emphasizes that mutual respect and trust enables health-care providers to help those in need in an environment that is safe for all. The campaign is based on studies conducted by the ICRC along with its partners in Karachi and Peshawar in 2016 and 2018, respectively. The research focused on factors of violence, types of violence and the primary perpetrators to recommend ways of building respect for health care.

Compassion, empathy and respect are the key pillars for Bharosa Karein, which addresses patients, attendants and health-care staff. Through an integrated approach comprising mass media outreach, on-ground mobilization, digital media platforms and engaging various players, the campaign also aims to raise awareness on how to identify and react to an emergency. A short video of the campaign can be viewed here.

Federal minister for National Health Services, Regulations and Coordination Dr Zafar Mirza, who was the chief guest at the launch event, said, "Health-care personnel themselves fall victim to the ire of patients' families. This is a commonly-observed and growing phenomenon. Though we observe it, we do not do anything to tackle it. I really appreciate the ICRC for taking up this issue and raising awareness about it and I assure continued support for such initiatives."

While the campaign addresses the negative perception of attendants towards health-care workers, the ICRC in Pakistan also works on enhancing the communication skills of medical personnel through the de-escalation of violence training sessions. This training module was developed based on research done in Karachi. Emphasizing the shared responsibility of attendants and health-care providers, secretary of health, Khyber Pakhtunkhwa, Dr Farooq Jamil said, "Bharosa Karein addresses a key issue facing the health-care system in Pakistan. While such campaigns are important to help people understand the impact of their actions, legislation is also a key component for furthering this change."

The ICRC in Pakistan uses a multi-disciplinary approach to prevent violence against health care. One of the many programmes under the initiative is to proactively raise public awareness, encouraging people to be more respectful towards health-care workers and facilities. The Rasta Dein and Pehlay Zindagi campaigns of 2016 and 2017 were also part of this effort and aimed at improving respect for the right of way for ambulances.