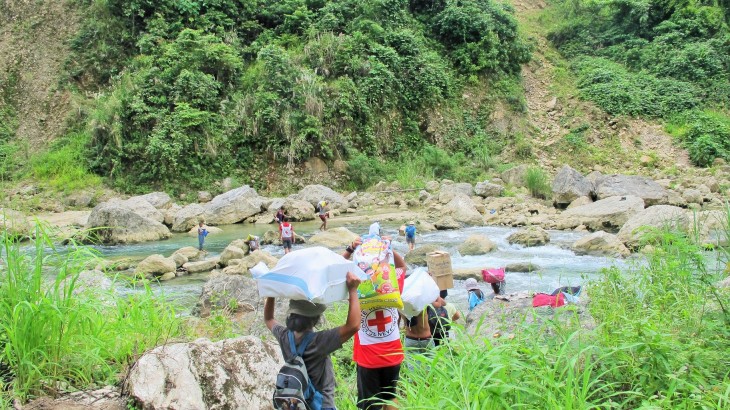 Displaced for a year in Tandag City, recently-returned residents of a village in San Agustin municipality, Surigao del Sur prepare to cross the Hubo river then a steep uphill climb for home after receiving food and hygiene items from the ICRC with the support of the Philippine Red Cross. ICRC/L. dela Cruz

About 4,700 people who were displaced for one year due to armed violence in Surigao del Sur recently received substantial support from the Red Cross to rebuild their lives.

The International Committee of the Red Cross (ICRC), with the support of the Philippine Red Cross (PRC)-Surigao del Sur chapter, distributed aid from 13 to 20 October to the mostly indigenous families who returned to their hometowns in Tago, Marihatag, San Miguel, Lianga, and San Agustin municipalities in early September.

"When we returned home after spending a year in the sports complex in Tandag City, all our livestock and crops had died. Weeds and grass covered our fields. We will have to replant and revive our farms so we can provide for our families," said Demetrio Bada of Barangay Lagangan, Tago Municipality.

Thousands of people fled their homes after three civilians were killed by armed men in their community in September 2015. Only a week later, the ICRC was able to give relief items to displaced families who sheltered in the provincial sports complex.

"The main challenge for these returning communities will be how they can restart their lives. It will take them at least six months to start rebuilding. With ample support, they will be able to recover faster," said Olav Sinsuat, head of the ICRC office in Butuan, Agusan del Norte.

To help the formerly displaced cope, the ICRC provided each family with half-month food rations consisting of 25 kilograms of rice, 12 cans of sardines, 2 liters of oil, 1 liter of soy sauce, 1 kilogram of sugar, ½ kilogram of salt, as well as hygiene items.

Each family also received string beans, eggplant, squash, bokchoy (pechay), and bitter gourd (ampalaya) seeds so they could produce vegetables in their backyards, for their own consumption.

Between September 2015 and February 2016, the ICRC and the PRC helped more than 3,200 displaced people in Surigao del Sur through distribution of food, household, and medical items; provision of potable water; and construction of toilets in the evacuation center. The aid from the Red Cross augmented the support given by Philippine authorities.