Philippines: Intensifying detection of tuberculosis in jails and prisons 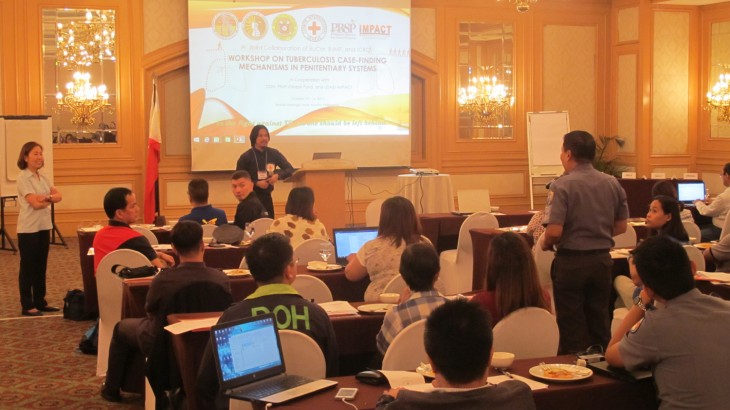 Manila (ICRC) – Health representatives from key government agencies gathered today for a three-day workshop organized by the ICRC with the Bureau of Jail Management and Penology (BJMP) and Bureau of Corrections (BuCor) to discuss the most effective ways of detecting tuberculosis (TB) in detention facilities.

More than 60 senior TB coordinators and managers from the BJMP, the BuCor, and the Department of Health joined the workshop on "TB case-finding mechanisms in the penitentiary system" to see how best practices—such as entry screening, cough surveillance, and mass screening—could be systematically replicated across the country and eventually reduce number of people affected by the contagious disease.

"Based on three years of TB control programs in our pilot sites—the New Bilibid Prison (NBP) and Quezon City Jail (QCJ)—intensified TB detection methods such as mass screenings helped capture the cases that had been missed. We hope the workshop will help consolidate the approach on improving TB case detection in detention places," said Beatriz Karottki, health coordinator of the ICRC.

The Philippines is one of the top 30 high-burden countries in the world plagued with TB. In 2015, it was estimated that every hour, about 30 Filipinos are identified with active TB. Each day, 63 Filipinos die from this preventable and curable disease.

In detention facilities, based on 2015 worldwide estimates by the World Health Organization, four or five inmates for every 100 will fall ill with TB. Overcrowding in jails and prisons contributes to the rapid spread of the disease among detainees.

In 2015, the NBP and QCJ reported 540 and 285 TB cases, respectively—with incidence rate of 8 to 13 times higher compared with TB incidence outside detention places. The high numbers of TB cases in both sites were captured largely through mass screening activities.

"The number of jail health personnel may be limited, but with sufficient and correct information from this workshop on how to properly conduct TB case-finding in jails, our health staff will be more competent and confident to identify and manage TB cases in jail facilities effectively," said J/Sr. Insp. John Paul Borlongan M.D., BJMP's national TB coordinator.

Since 2007, the ICRC has been working closely with Philippine authorities to address the causes and consequences of extreme overcrowding in jails, focusing particularly on TB, living conditions, and delays in the judicial system. The ICRC also works with the authorities to strengthen the overall health system in detention facilities.

"With the support of partners and stakeholders, in particular the ICRC, the NBP TB Treatment Unit staff will continue to exhaust all efforts to diagnose and treat all TB cases to the point of cure. We ultimately hope to put an end to this menace," said Dr. Cecilia Villanueva, BuCor TB medical coordinator.