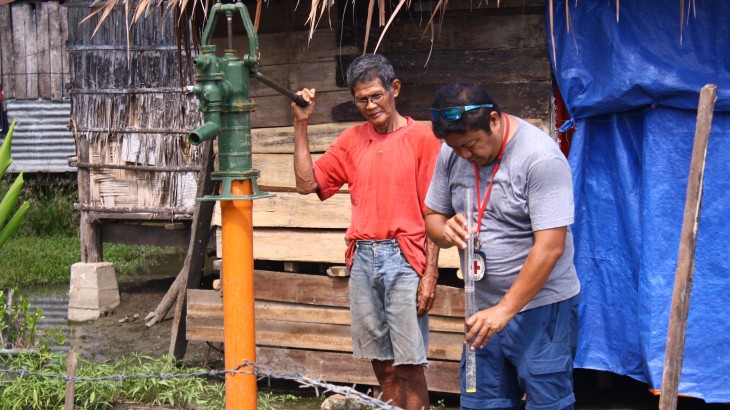 An ICRC engineer tests the water from one of the hand pumps in Barangay Butilen before handing the project over to the community. CC BY-NC-ND / ICRC / L. dela Cruz

Armed clashes that erupted between armed groups in February forced a large number of families to flee their homes in many municipalities of Maguindanao.

Displaced civilians had to build makeshift shelters inside evacuation centres, and since there was not adequate access to clean water, people were forced to collect water from open wells and unmaintained hand pumps – disregarding the health risks that they posed. Others had to buy water from private companies, which was an added financial burden on displaced families.

Sanitation was another concern inside the evacuation centres. The limited number of toilets and latrines could not cater to the influx of people, causing them to use rivers and swamps – regardless of the health issues that might occur.

In response to these dire situations, the ICRC and the Philippine Red Cross set up 49 water tanks in 27 evacuation centres, where more than 100,000 litres of potable water was delivered daily to 34,000 displaced people. The assistance helped to safeguard the health and sanitation needs of close to 6,300 families during the entire duration of their nearly three-month displacement.

Following the emergency phase, the ICRC commenced the construction of hand pumps and latrines, improving the supply of clean drinking water and increase access to sanitation facilities in the villages of Butilen, Sambolawan and Ganoy, in the municipality of Datu Salibo, Maguindanao.

"Our aim is to build facilities that would support access to safe water and toilets for the residents of these host villages. If conflict and displacement occur, these facilities could also serve affected civilians who may evacuate to Datu Salibo. It is very important that the community takes ownership of this project to make it sustainable," explained Marco Albertini, ICRC's water and habitat coordinator.

In July, the ICRC started the construction of 10 latrines with individual cubicles, seven standard hand pumps and nine hand pumps with slow sand filters, which will be accessible inside evacuation centres and other possible displacement sites within Datu Salibo. These facilities will be completed within the year.

"The fighting has placed a strain on our limited water supplies and public toilets. But we cannot drive evacuees away; they have nowhere to go," explained Faidza Sandigan, barangay captain of Butilen. Four evacuation centres were set up in their village to accommodate residents fleeing armed violence.

"The latrines and wells being built by the Red Cross will improve our lives," Faidza added.