Like in physical war, trust and truth will be the first victims in digital frontier 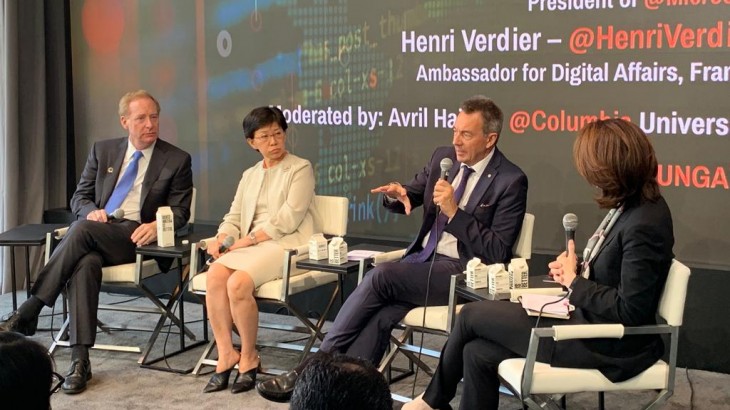 The digital space is the next frontier in war, and like in physical war, trust and truth will be the first victims.

"The digital transformation is affecting each and every sector – the fabric of life – and so it is affecting the humanitarian sector," President of the International Committee of the Red Cross, Peter Maurer said to diplomats who crowded the SDG Media Zone tent at United Nations Headquarters.

In partnership with Microsoft and its president and chief legal officer, Brad Smith, the ICRC convened a discussion titled "Advancing Digital Trust, Security and Cooperation" on Monday at a side event to the 74th Session of the UN General Assembly. Maurer and Smith were joined by the UN High representative for Disarmament Affairs, Izumi Nakamitsu, and Avril Haines of Columbia University.

For 156 years, the ICRC has been at the frontlines of conflict, witnessing the effects of changing technology on warfare and encouraging efforts by States to regulate warfare as it evolves. Developments have given and will continue to give rise to new means and methods of warfare, such as cyber-attacks, armed drones, and autonomous weapons systems, each raising new humanitarian challenges.

But conflict has changed outside of the digital transformation as well, Mr. Maurer noted. "We have seen battlefields become more complex ... borders between civilians and militaries have become fuzzy, battlefields have expanded globally," Maurer said. On top of these changes, new technologies have served as an accelerant to fragmentation of war. "Hyper-connectivity brings different actors and problems, in a new dimension and with new speed."

For the ICRC, digitalization presents the potential to improve the ability to reach out and be reached by people affected by conflict and other violence. That potential, however, must be balanced with consideration for their protection from risks unique to the digital landscape. "How does digital transformation fundamentally change the way we do work and how can we use digital tools to do better and to increase our protection and assistance work?" Maurer asked.

"In war, trust and truth are the first victims," Maurer stated. "How do we establish trustful relationships? How can truthful relationships create trust with communities, as well as with belligerents in the worst of circumstances?"

On governance of the digital space, Maurer noted that "there is a natural tension between what we call neutral, impartial and independent humanitarian action ... and the preventive and attributional work that has to be done, which is intrinsically political."

Maurer cautioned that: "ICRC cannot be the organization which at the end of the day, is responsible for political attribution of cyber-attacks."