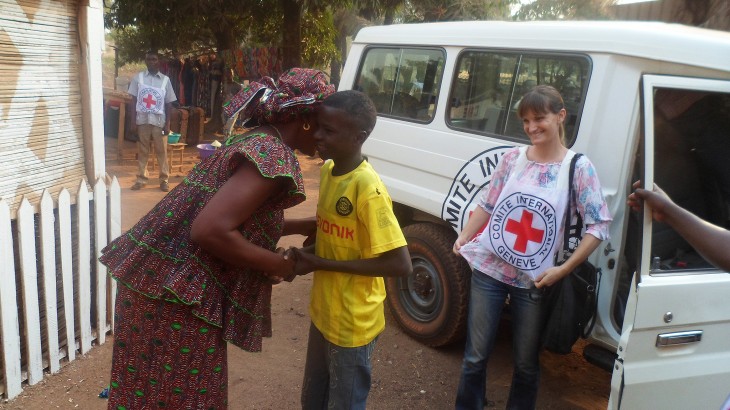 Hundreds of people in the Central African Republic have no news of their loved ones following the conflict and other armed violence in the country. The ICRC, working closely with the Central African Red Cross Society, is pursuing its efforts to help these people trace and contact their relatives.

Forced to leave their homes in search of safety elsewhere in the country or in neighbouring countries, many families became split up as they fled. Children and adults alike became separated from the rest of their families and in many cases have heard nothing for months on end. This uncertainty is a torment, making daily life even harder to bear.

Worry and uncertainty takes its toll on the whole family. The longer it goes on, the greater their despair and anguish. Those separated from their families undergo an ordeal. Alone, without their family's protection and support, individuals – especially children – are even more vulnerable. "While the conflict and other violence persists, this problem is unlikely to be resolved any time soon," said Ahmed Berrad, who runs the ICRC's protection activities in the Central African Republic.

ICRC staff and Central African Red Cross volunteers are striving to alleviate the suffering of those affected. They try to trace the missing people and, wherever possible, restore contact between family members. "In most cases, just getting news of their loved ones is a huge psychological relief for the families and restores their hope," said Mr Berrad. "With their consent, we prioritize reuniting children with an adult family member."

In 2014, the ICRC and the Central African Red Cross registered more than 561 people separated from their families. Their tracing efforts, both in the country and abroad, have resulted in 108 children and three vulnerable adults being reunited with their families, while the fate of a further 38 people reported missing was clarified. Relatives kept apart by the conflict were also able to stay in touch thanks to the delivery of over 650 Red Cross messages (short, written messages containing family news) and 172 phone calls facilitated by the ICRC.

Bangassou. Portrait of the children who were reunited with their families. CC BY-NC-ND/ICRC/Innocent Bangalo