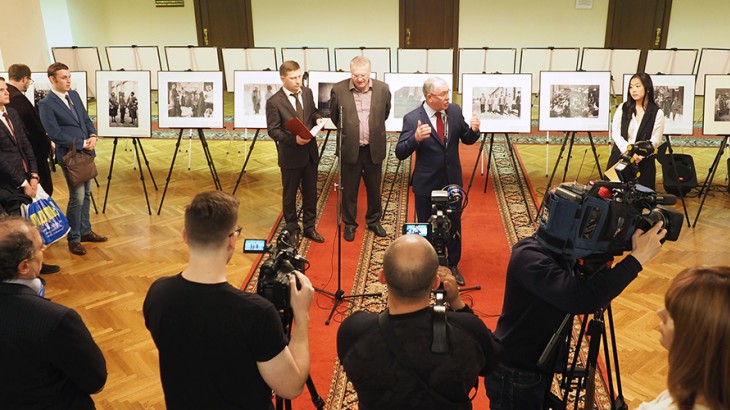 An ICRC photo exhibition has given Russian MPs a unique look at 200 years of war and the role of the Red Cross and Red Crescent Movement.

The exhibition featured over 60 rare photos from the archives of the ICRC, news agency TASS and the Russian Central Museum of Contemporary History, covering armed conflicts since the nineteenth century.

"Staying Human in the Flames of War" was presented in the State Duma (parliament) of the Russian Federation, with support from the Health Protection Committee. CC BY-NC-ND / ICRC / Galina Balzamova

The camera's lens showed contemporary viewers the events of the First and Second World Wars, the Great Patriotic War and the Soviet-Finnish War, plus conflicts in Afghanistan, Libya, Rwanda, Syria, Vietnam, Yemen, the former Yugoslavia and elsewhere.

Some of the photos illustrating conflicts from the distant and recent past.

In all these conflicts, the Red Cross and Red Crescent Societies and the ICRC helped the wounded, repatriated prisoners of war, trained medical personnel, facilitated blood donation, organized feeding centres for starving civilians and carried out many other activities.

"We're glad of this opportunity to raise awareness of Red Cross and Red Crescent activities among decision makers, because they're the people who influence the fate of victims and the assistance they receive," said Valentina Kim, deputy head of the ICRC's Regional Delegation in Moscow. "The main idea of the exhibition, and indeed of the Red Cross itself, is that mercy and humanity can be maintained even in the most difficult times, in order to 'stay human in the flames of war'."

The ICRC prepared the exhibition in partnership with the Russian news agency TASS and the Russian Central Museum of Contemporary History.