SARC and ICRC finalise evacuation of some 35,000 people from devastated Aleppo neighbourhoods 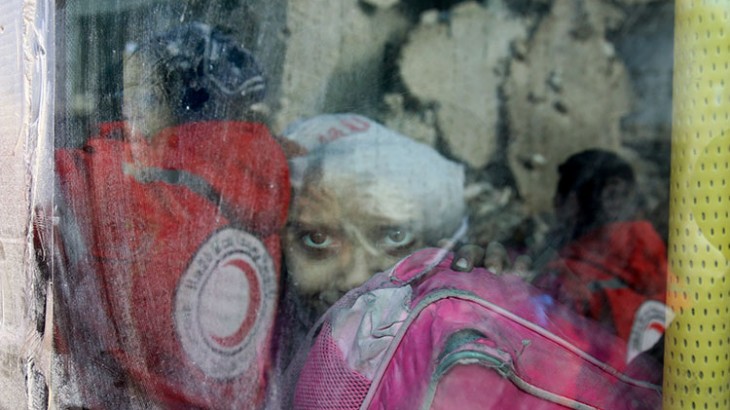 A girl is evacuated on a bus from Eastern Aleppo, Syria. REUTERS / Abdalrhman Ismail

Damascus/Geneva: The operation to evacuate civilians and fighters from East Aleppo was finalized this evening, after a week marked by stops and starts and increasingly bad weather. Some 35,000 people were evacuated to neighbouring rural areas by the Syrian Arab Red Crescent (SARC) and the International Committee of the Red Cross (ICRC). One hundred critically wounded and sick patients were amongst the evacuees.

"Our priority, aside from helping the most vulnerable, was to ensure that civilians were leaving of their own free will", said ICRC's Head of Delegation Marianne Gasser from Aleppo. "These are communities whose neighbourhoods have been devastated by violence, and families have been struggling for months to find safety, food, medical care or appropriate shelter. They appeared desperate to leave, even though the situation was extremely painful and confusing."

With temperatures below freezing, people were burning whatever they could find, including blankets and clothes, to keep themselves and their children warm while they waited to leave. More than 100 SARC volunteers and ICRC staff remained by their side day and night over the past week to ensure their safety and try to provide some guidance and reassurance.

“There are no words to describe it … the destruction, the darkness, the despair.” Our aid worker on what he saw in #Aleppo this week. pic.twitter.com/BFqtisZKo2

The evacuation, which began last Thursday, was stalled several times because of ongoing negotiations between different parties on the ground. It was intricately linked to a parallel operation from the besieged towns of Foua and Kefraya in Idlib, in which more than 1,200 people, the majority women, children and the elderly, were temporarily evacuated in the other direction to the city of Aleppo by SARC and ICRC.

"Civilians who, like these thousands of families from Aleppo and Foua and Kefraya, chose to leave must be able to return to their homes when they want to", said Ms Gasser. "Many will one day want to come back."

SARC and ICRC were not part of the negotiations but were called upon by the different sides to act as a neutral humanitarian intermediary and implement their agreement.

TO ORGANISE INTERVIEWS WITH OUR SPOKESPEOPLE AS OF FRIDAY 24/12/16, please call:

In the meantime, please email: