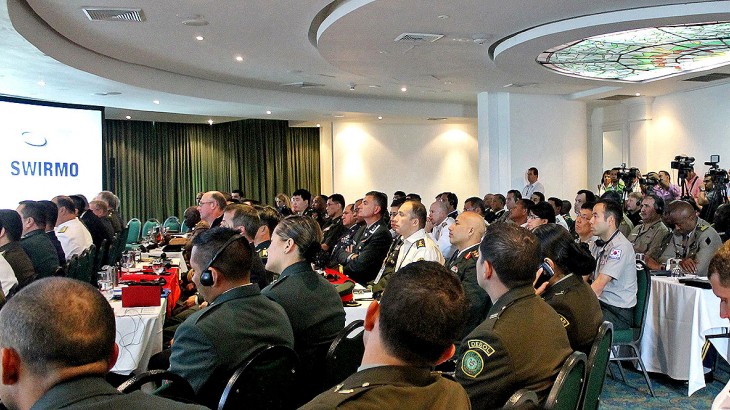 Both instructors and participants are senior military officers, and the workshop provides participants with the tools necessary to improve compliance with the laws governing military operations and focus on the integration of international law in the decision-making process in combat and law enforcement operations.

SWIRMO has become an important annual event, and each year, the ICRC and a national defence force share the hosting. The 2007, 2008 and 2010 editions of SWIRMO took place in Switzerland with the Swiss armed forces as co-hosts. SWIRMO 2009 was held in Paris with HQ French land forces, and SWIRMO 2011 took place in Saldanha, South Africa, in cooperation with the South African National Defence Force. In 2012, the ICRC held the workshop in Kuala Lumpur hosted by the Malaysian Armed Forces, and last year it was held in Cartagena de Indias in cooperation with the Colombian ministry of defence. The 2014 event will be held in Xi’an, China, in cooperation with the People’s Liberation Army of China.

By gathering senior operational officers from around the world to focus on the law of armed conflict and human rights law, SWIRMO benefits from a unique dynamic, in which experiences, achievements and best practices can be shared in a truly international environment, allowing participants to broaden their views on the law in a practical operational context. Beyond developing a deeper understanding of the most pressing international legal issues of the day, the workshop highlights the need to integrate legal considerations into operational practice.

Swirmo 2014
When: 22-27 September 2014
Where: Xi’an, China
The 2014 Senior Workshop on International Rules governing Military Operations (SWIRMO) will be held in Xi’an, China, in cooperation with the People’s Liberation Army of China. SWIRMO has become an important annual event, bringing together senior military officers from around the world to address the international legal framework applicable to military operations.
Contact for armed forces:
Pete Evans
SWIRMO organizer
Email: pevans@icrc.org
For all media queries, please contact our press office:+41 22 730 34 43