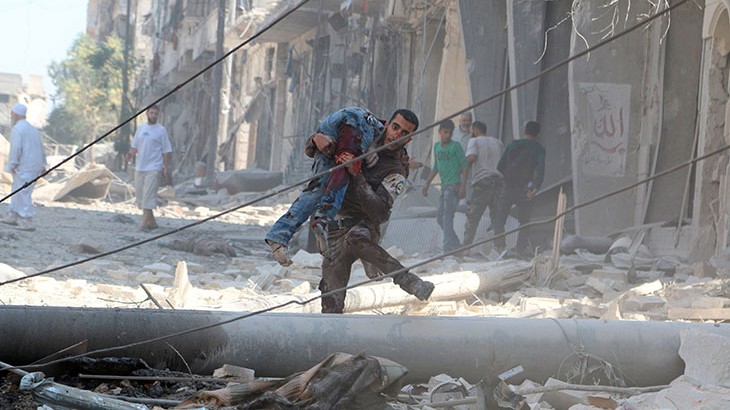 Damascus/Geneva: The head of delegation for the International Committee of the Red Cross (ICRC) in Syria says heavy and indiscriminate shelling around the city of Aleppo is causing untold numbers of civilian casualties. Marianne Gasser said that every neighbourhood of the city had come under fire during the past few days and that vital infrastructure was being repeatedly hit.

"The situation is devastating and overwhelming. We hear that dozens of civilians are being killed every day and scores more injured from shells, mortars and rockets. The bombing is constant. The violence is threatening hundreds of thousands of people's lives, homes and livelihoods,' said Ms Gasser, who is in Aleppo.

The past few days have seen water systems, hospitals, warehouses, ambulance stations, public buildings and civilian homes destroyed or damaged on all sides of the front lines. Patients and medical workers have been killed or injured. Doctors and medical staff are working with no respite to cope with the influx of casualties, while many damaged hospitals no longer function. Many of the injured or chronically ill cannot reach health centres, while entire civilian areas are being cut off from the goods and services essential for their survival.

There has been a dramatic rise in emergency trauma cases in hospitals during the past few days. Civilians on all sides are struggling to find shelter, food and medical care. The ICRC, along with the Syrian Arab Red Crescent, are working flat out to provide relief and restore or maintain vital services, but are having difficulty reaching many areas because of the violence.

'No adult, let alone child, should have to live through this. People are trying to survive in the most desperate of circumstances. All parties to the conflict, and all those with influence over them, must stop ignoring the laws of war. Civilians and civilian infrastructure must be protected," said Ms Gasser.

Listen to Marianne Gasser's latest account: on the situation in Aleppo and people seeking medical care.

A young boy receives treatment for injuries at a hospital in Aleppo.

Children play at a displaced shelter in Aleppo.