In South Sudan, a remote clinic works to save limbs and lives 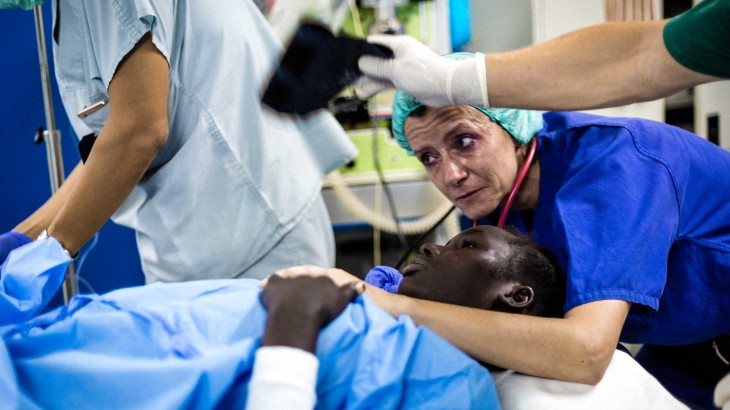 Nyakosti looks terrified. The 15-year-old knows the surgical team may amputate her leg.

Silvana, a pediatric nurse from Italy, wraps her arms around the teenager and whispers in her ear. Nyakosti stares into Silvana's eyes as they hold a conversation in two languages they don't share. Silvana is so in tune with Nyakosti that it almost feels like prayer. Their brows nearly touch. Tears surface in Silvana's eyes.

One day earlier a medevac helicopter dropped Nyakosti in Maiwut, South Sudan, where an ICRC surgical team is stationed. Ten days before that, a bullet ripped through Nyakosti's right thigh, leaving a swollen, gangrenous wound. After her arrival, the warm and friendly teen recounted her story. 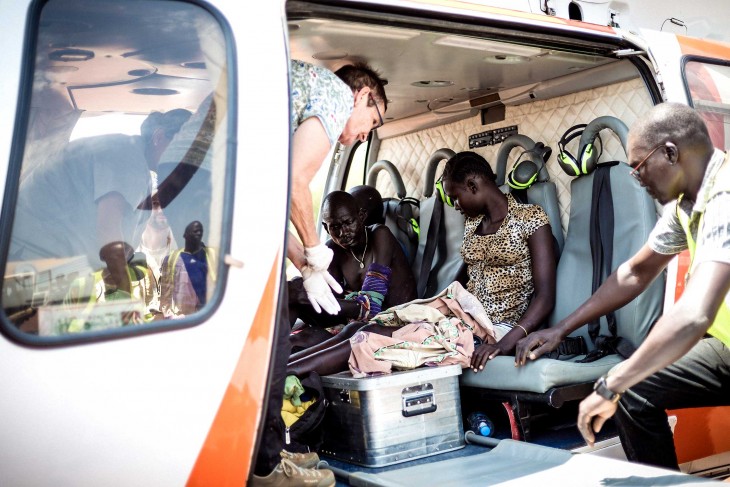 "I was sent by my parents to get some grain. In between villages the enemy saw us," she said. "I was shot first. The attackers chased the rest and shot and killed my brother. When they returned, my mother screamed, 'You killed my son!' They let us go. We went to try and find medicine in the next village but there was none. During the war, the people who used to trade things [like medicine] left because of the violence."

Nyakosti is the latest victim of violence in South Sudan, which exploded into conflict in late December 2013. Since then millions have been uprooted from their homes in search of safety. So many have had so little to eat that the U.N. declared famine in the country in February. 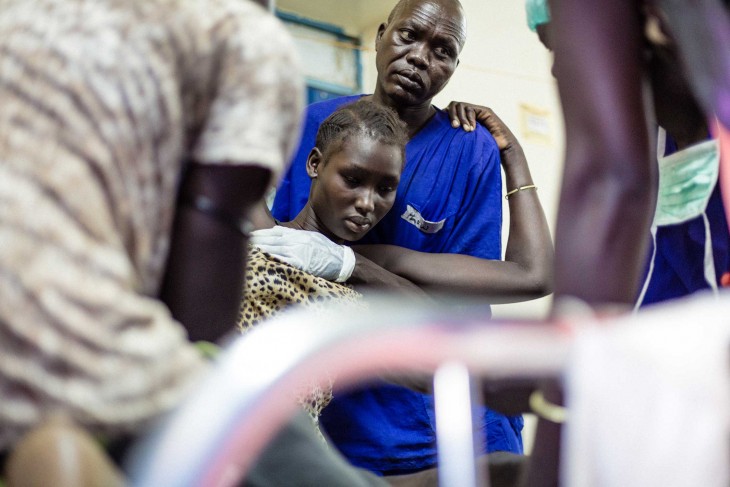 Niakosi is taken to the operation theater for her first surgery. CC BY-NC-ND / ICRC / A. Synenko

The frightened teen is laid gently onto the operating table. Alexander, a quiet Russian anesthesiologist, holds onto the girl while Naomi, an anesthetist from Japan, administers the anesthesia. The surgical team cleans Nyakosti's open flesh with soap and iodine; the team's conversation makes it clear they don't yet know if she will keep her leg.

Growing violence - and a growing caseload

The village of Maiwut lies nestled in the southeast corner of South Sudan, 20 kilometres from the Ethiopian border. The simple hospital draws residents from all over the region. The ICRC stations 13 international staff here, including doctors, nurses, surgeons, a pediatrician, and two midwives. The number of surgeries performed each day fluctuates, from seven on average to up to 20 a couple of weeks ago. In January 46 patients wounded from battle were brought in on nine helicopter trips over three days.

Michael, a surgeon from Tanzania, stops by a bed and asks what the problem is with the patient. "Gunshot wound" is the response. Nearly every patient in Maiwut has been shot. Local residents are also a common site. In a town without electricity and only a sparse market, the hospital functions as a buzzing hive of social activity and idle chatter, anchored by a woman selling coffee next to the "Weapons not Allowed" sign by the entrance. People come here to chat, to charge their phones (much to the chagrin of hospital staff), and to complain about salaries. 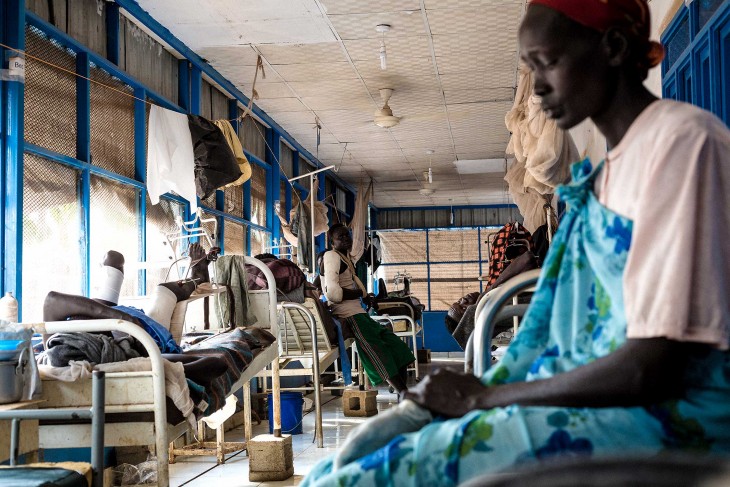 Maiwut hospital is one of the few providing surgical treatment to patients in the opposition controlled areas. CC BY-NC-ND / ICRC / A. Synenko

So you see it all: A man whose head is mummy-wrapped and has a tongue swollen three times its normal size – the unfortunate result of getting extremely drunk and falling off a bridge. An adorable 8-year-old amputee named Waali who was sleeping, he said, when a cow ambled over and crushed his left leg. When he returns home, he said mischievously, he aims to get his father to marry a second wife, so he can give away that cow as dowry. Another young boy has a wide laceration cutting across his forehead. His hospital report says he was "beaten by someone with stick."

But the lion's share of people were flown in on ICRC aircraft from Lankien, from Kodok, and from Waat, all with bullet holes in their bodies. This is in part because it is the dry season, and if you want to get anything done in South Sudan you have to do it now, including war. The rainy season brings illnesses and accidents. The dry season brings massive helicopters filled with gunshot wound victims. 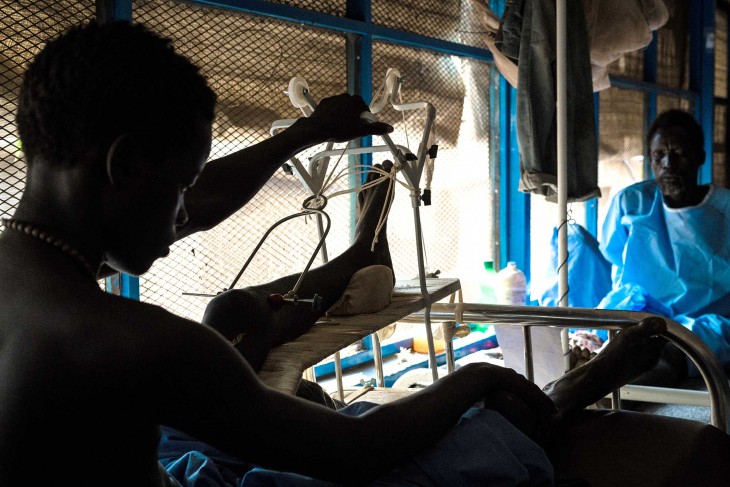 As fighting intensified over the last several months across the country it has been receiving dozens of war wounded patients. CC BY-NC-ND / ICRC / A. Synenko

All that's dead and broken

Nyakosti lies on the operating table, unconscious to the major medical effort to save her leg. Daniel, a surgeon from Switzerland, is pounding a long pin into her bone. Will she keep the leg? "It seems so ... for now. We have to see how it heals." Good news.

The power goes out, and on cue a nurse pulls out his mobile phone to use as a flashlight. For three minutes the team works silently in the darkness, the only sound the click of metal tapping through bone.

Power returns, and the pin is now firmly in place. The team turns to the wound. Pink flesh the size of a palm protrudes from the thigh. Daniel cuts it open, removing thick hunks of fatty tissue. "The risk with this is in the femoral artery," he says. "If it's injured, you will see spectacular bleeding."

As he cuts through the flesh, Michael mutters, "it's more than ten days." Daniel agrees without looking up. Shard after shard of broken bone is removed. "The idea is to freshen both ends," he says. "Nature will heal the bone but we need to give nature the best possible chance. With infection and dead bone, the healing cannot happen. The key is to figure out what's dead and what isn't."

More bone comes out. A femur usually takes three months to heal. Nyakosti is young and healthy. If the surgical team removes all that's dead and broken, there's a decent chance – three months from now – that she will walk again. 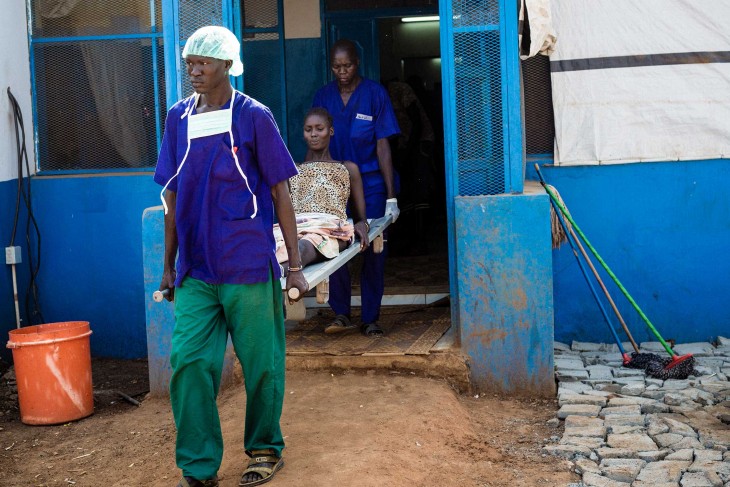