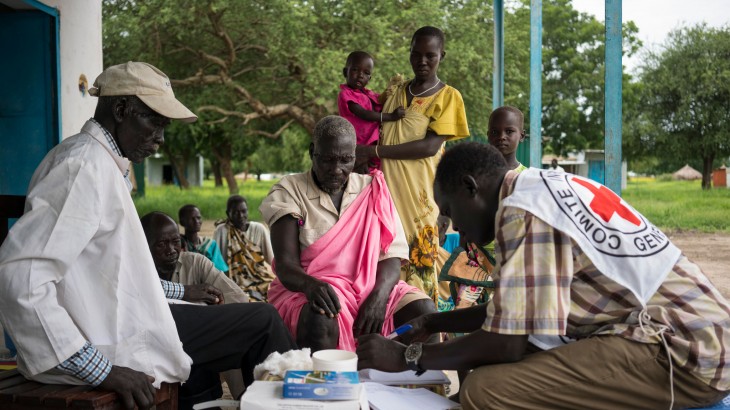 Mackenzie Knowles-Coursin/MKCimage Photos for the ICRC

"Seventy percent of deaths from illnesses in South Sudan are caused by curable diseases such as malaria, respiratory tract infections and diarrhea," says Divin Barutwanayo, ICRC's Deputy Health Coordinator in South Sudan. The country also has one of the highest maternal and child mortality rates in the world.

Decades of armed conflict that ended with the creation of the world's youngest nation in 2011 and the conflict that erupted two years after independence, have significantly affected the development of the country. This includes national health care services that are presently supported heavily by international donors and organizations.

"Organizations supporting health services face difficulties in terms of access, security, and logistical challenges, to mention a few problems, aggravated by the armed conflict." explains Barutwanayo. In 2016, 100 organizations were working in the health sector in the country, by mid-2018, no more than 40 are present.

Today, ICRC works in primary health care supporting 13 clinics in South Sudan - after being forced to close three clinics in June as a consequence of armed clashes, leaving people in the surrounding area without medical services. With its Primary Health Care program, ICRC seeks to reach people who could die due to common and treatable diseases. The ICRC supplies medicines and equipment and renovates medical facilities where needed.

Training of health workers is also central to ICRC's approach. This includes a nine-month training program for community health workers giving them the know-how to run a small health facility under the supervision of the County. This training ensures that the personnel are capable of carrying out diagnosis and treatment of basic diseases. The supported primary health care clinics serve as a catalyst for community health support with the goal of increasing the resilience of local communities towards health and to influence health behavior. At the same time, the ICRC also trains midwives in an effort to reduce maternal and child mortality and provides them with delivery kits.

Referring patients from a primary health care clinic to a County hospital is challenging as access to secondary hospital services is a major problem. It is estimated that only 20% of the patients who come to the ICRC-supported primary health care facilities in need of higher-level care can actually reach a secondary health facility within 24 hours. In emergency cases like an obstructed labor, a Caesarean section needs to be performed within three hours to avoid irrevocable harm to baby and mother. The problem of access is aggravated by poor quality roads which make travelling long and arduous.

In South Sudan, clinics are often forced to close because of fighting, while others have been completely destroyed or looted. "Health facilities and personnel must be respected. Attacks on health care workers and destruction or looting of health structures leaves thousands of people without access to vital health services. Starting all over again every time a hospital is rendered inoperable takes resources that can be used to build more hospitals." concludes Barutwanayo.

Highlights of our work in South Sudan between January and June 2018.

For more information, read the full update of our work in South Sudan.