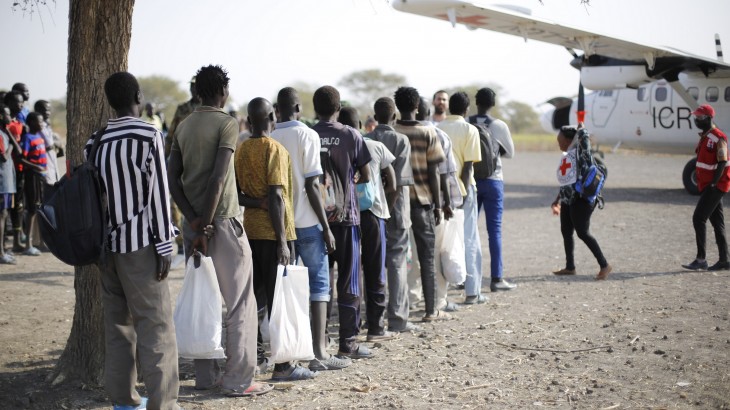 Juba/Geneva – The International Committee of the Red Cross (ICRC) has facilitated the release of 24 persons detained in relation to the conflict in South Sudan, including 16 detainees released on Friday.

This week marks the first releases of prisoners supervised by the ICRC and following the signing of the latest peace agreement in which parties to the conflict agreed to free detainees.

"Our role in this week's releases was to first ensure that all detainees were handed over voluntarily and that they had the opportunity to confidentially share their concerns," said François Stamm, the head of delegation for the ICRC in South Sudan. "We then facilitated the releases themselves, safely transporting the former detainees to different parts of the country when necessary, and always with their consent."

The ICRC medical staff were present at the releases to assess the detainees' health condition and make sure they are fit to travel.

The latest peace agreement for South Sudan, the Revitalized Agreement on the Resolution of the Conflict in the Republic of South Sudan was signed in September and mentions the ICRC as a facilitator for the release of persons detained in relation to the conflict.

The ICRC was not involved in any negotiations that preceded the releases, which were initiated by a specific request by the parties to the conflict. "We offered our services to all sides of the conflict, and confirmed our readiness to act as a neutral facilitator for the release of detainees as requested," said Stamm.

The ICRC was also mentioned as a neutral facilitator for the release of detainees in the Agreement on Cessation of Hostilities, Protection of Civilians, and Humanitarian Access that was signed between the parties in December 2017. In addition to this week's releases, the ICRC facilitated several release operations earlier this year.

The ICRC also regularly visits detainees in the places where they are being held in order to monitor their conditions and treatment. The organization works in a confidential way with those in charge of detention matters to discuss possible issues of concern related to the conditions in which detainees are held and their treatment.