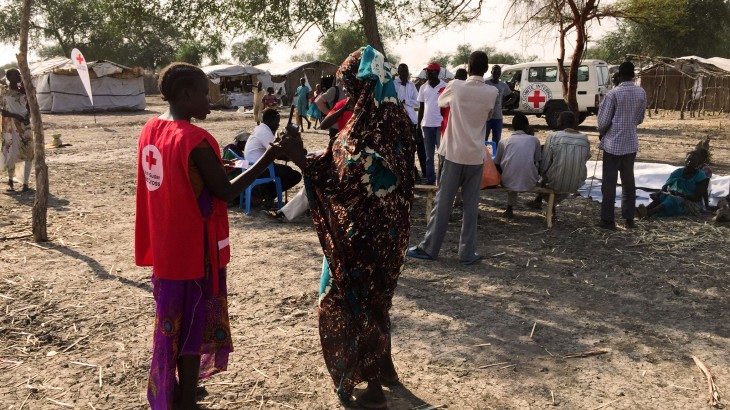 Five years ago, fighting at the border of Sudan and South Sudan split a community into two. With one phone call, the ICRC managed to connect hundreds of families that had fled from the violence and lost contact with each other. CC BY-NC-ND / ICRC / Matthieu Desselas

Five years ago, fighting on the border of Sudan and South Sudan split a community in two. Hundreds of families were separated when they fled the violence and lost contact with each other completely. Following word of mouth, the ICRC managed to reconnect them—and with one phone call, managed to share news with 2,500 people about their loved ones.

In a world where cell phones and social media keep people constantly connected across the globe, it can be hard to understand how close relatives separated by conflict are unable to find each other for years, sometimes decades. Yet for a rural community straddling the border of Sudan and South Sudan this is exactly what happened.

The Werni clan – a part of the Nuba tribe– had lived in South Kordofan in the far south of Sudan for generations. They lived in villages headed by two sheikhs and brothers-in-law, Bashir Anil and Gibril Nadir. But in 2013, heavy fighting broke out around their villages and the entire Werni community had to flee.

A group of about 500 people found themselves caught in the crossfire and were forced to flee south with Bashir Anil. They crossed the border into nearby South Sudan and travelled for several weeks until settling down in the town of Kodok in Upper Nile state.

Kodok provided them with a refuge to rebuild their lives, but they lost contact completely with the rest of their community – more than 2000 people. They did not have the phone numbers of their relatives and even if they did, there was no phone network in Kodok. With no means to contact them, they were left to agonize over the whereabouts of their loved ones.

Four years later, in April 2017, South Sudan's civil war reached Kodok. The town was suddenly on the front line of the fight between government and opposition forces. The families fled with the rest of the population in-land up to Aburoc, a small displacement camp. At the same time, the ICRC office in Kodok was also forced to evacuate and set up a new location in Aburoc. It is there that Céline, an ICRC staff member, encountered the Nuba families and met Sheikh Bashir Anil. They told Céline their story and said they had heard that the rest of their community had fled to another displacement camp in South Sudan called Yida.

This camp was a long distance from Aburoc, so the ICRC sent another staff member based in the region, Nassim, to look for this community. Nassim searched thoroughly but it became quickly clear that none of them were in Yida camp. However, in his search, Nassim heard that there was a displaced Nuba community roughly a dozen kilometres away in a place called Ajuong Thok.

Nassim travelled a couple of hours on dirt roads and found the families. He was introduced to Sheikh Gibril Nadir, the brother-in-law of Sheikh Bashir Anil. He was overjoyed to hear news of the other half of their community and said, "We did not know where those people were since we were separated in Sudan!"

With this good news, Nassim and another ICRC staff organized to facilitate a satellite phone call session between the two communities. There were so many families asking for news of their relatives that they couldn't all talk over the phone so the two halves of the community named leaders to be the voice of several households.

When the phone call session started, the leaders were a bit doubtful that the ICRC had really found the other half of their community and that the people on the phone were really their relatives. Yet after a few questions, they were fully convinced that their families were on the other side of the line and their faces changed to expressions of surprise and joy.

The phone call lasted nearly two hours as families exchanged long overdue family news. Since then, the ICRC organizes monthly phone call sessions where all members of the Nuba community can reach their loved ones.

"The [security] situation is good now," said the Sheikh Bashir Anil in Aburoc. "We are ready to return to the Nuba Mountains. It is time now."

Now they are reconnected, Sheikh Bashir Anil are able to coordinate the move with the other half of their community so they will not lose touch, but find each other as they return home.