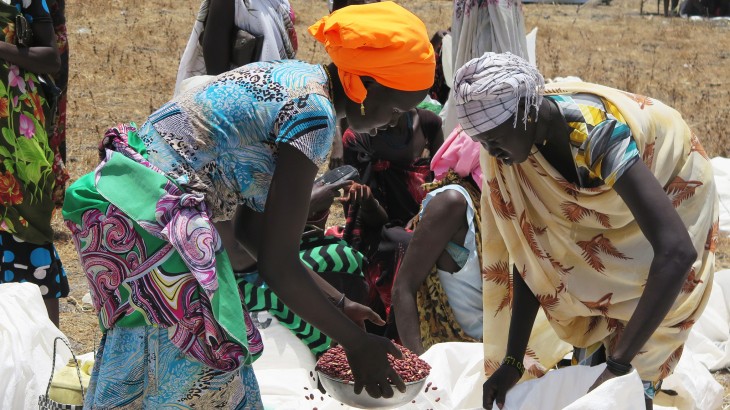 Displacement, insecurity, flooding and a host of other issues have negatively impacted the ability of many South Sudanese to grow or otherwise access staple foods. This is compounded by renewed fighting, which has displaced thousands of people, preventing them from planting and cutting off their access to markets. Nutritionist Marijka Van Klinken explains the results of the ICRC's intervention so far.

How does the ICRC work to address food insecurity?

The ICRC's response to food insecurity prioritizes prevention, aiming to provide assistance that will increase food security before negative effects such as malnutrition are felt, or in the case of an area where malnutrition is already prevalent, to reduce the rates as much as possible and build resilience. With this preventive approach, the ICRC provides assistance in the form of food in emergency situations, and also distributes seeds in situations where a sustainable solution is possible and appropriate. In South Sudan to date, the ICRC has distributed over one million monthly food rations in some of the most affected parts of the country, and provided nearly 400,000 people with seeds and tools. Given the recent increased fighting and insecurity, the focus will necessarily have to be on emergency support with food rations in the short term.

How has the ICRC been doing this?

The ICRC has been distributing food rations in South Sudan based on our understanding of the needs as well as our ability to access the population and our logistical capacities. We are currently conducting food airdrops in two areas. In our food basket, we include staples like sorghum and beans, as well as smaller amounts of sugar, salt and oil for cooking. Each basket contains enough food to meet the basic needs of a household of six people for one month, providing roughly 2,300 kilocalories per person per day. The amounts of each item as well as the contents of the basket itself may be adjusted over time to reflect changing needs.

In order to assess the impact of our interventions, we have been using data collected during SMART (Standardized Method of Assessment in Relief and Transition) surveys conducted by the ICRC as well as by other humanitarian organizations providing support in these areas. The surveys measure the prevalence of malnutrition in children with a combination of indicators such as weight, height, age and mid upper arm circumference, among others.

What are the results so far?

In an area in which the ICRC has been assisting for 11 months, we have seen a significant improvement over the course of the intervention, with global acute malnutrition, or GAM (moderate and severe malnutrition figures combined), dropping from 34.1% in June 2014 to 12.0% in March 2015. Comparisons with surrounding counties where the ICRC has not been able to intervene show that malnutrition rates among children in the area where ICRC has intervened are at 11.3% GAM, while in surrounding areas they are nearly double, at 21.1% GAM.

There are many factors that could contribute to this outcome. One notable fact is that malnutrition is often caused by disease, and in the area where the ICRC has been assisting for five months, 80% of children have been sick, but only 12% suffer from malnutrition. This suggests that food assistance is making a significant difference. The ICRC will continue to collect data to ensure that our response is adapted to the situation in the country and the changing needs.

Why are the coming months so difficult?

We are approaching the yearly lean season, in which many families may face what is sometimes called a 'hunger gap'. There are two reasons for this. First, because many people were displaced during the last planting season, the number of families growing food was significantly diminished. Second, the rains were much heavier and lasted for a longer period than usual, resulting in flooding and a poor harvest. Now, many communities have run out of food and still have several months before the next harvest comes in, if they are able to plant.

While this period is often challenging in a year following a small harvest, it will be particularly difficult this year as a result of the ongoing crisis. People are less resilient than they were two years or even one year ago, due to the protracted crisis. Market access is difficult if not impossible for many as a result of ongoing insecurity, and people are not able to resort to some of their traditional coping strategies, such as trading cows for grain.

What is the ICRC doing to prepare for this season?

As noted, the ICRC's approach to food insecurity is preventative. We are looking for and implementing evidence-based ways to prevent malnutrition, targeting young children who are nutritionally the most at-risk group. Chronic or acute malnutrition in children under five can have lifelong repercussions on health, life expectancy and quality of life.

Malnutrition is caused by two things generally: poor dietary intake and disease. As the rainy season approaches, we expect to see a rise in water-borne illnesses, particularly among displaced communities. This challenge combined with the depletion of food stocks will make for a particularly difficult period for many in the most affected areas. In order to help young children continue to get the micronutrients they need during this difficult period, we have added a new item – Super Cereal – to our food basket. What is Super Cereal?

Super Cereal is a nutritional supplement for children under five years of age that has been fortified with vitamins and minerals. It is a blend of corn, soya and a small amount of sugar, plus the required vitamins and minerals. It is meant to be a supplement, and not a replacement, for other food. It provides children with extra kilocalories, and helps add enough extra food to enable children to eat three times a day. This increased frequency combined with the additional micronutrients are important factors in the prevention of childhood malnutrition.

How do people understand the benefits of Super Cereal?

As important as providing the Super Cereal itself is providing practical information to enhance how families can best benefit from it. Through radio announcements, a radio drama and sessions in communities where Super Cereal will be distributed, as well as at the distribution points, we have been explaining what it is, that it is intended for young children, and how to cook it. Nearly 2,000 mothers have so far participated in these community outreach meetings and cooking demonstrations. This allows for good exchange of useful information about the proper way to prepare the Super Cereal, its benefits for young children, and promotion of good hygiene practices.

We will conduct in-depth assessments in June and again in September to better understand the needs of people, and also the impact of our interventions. This will allow us to see what is working and what is not, and what we might need to change or address in order to meet our goals. We will also continue monitoring other areas for signs of increased nutritional distress, as our access and capacity permits.

Where possible, we are already looking at longer-term solutions and distributing seeds and tools to help families rebuild their livelihoods. We believe that a sustainable solution is essential and, situation permitting, we will focus on these types of interventions as much as possible in the coming months. 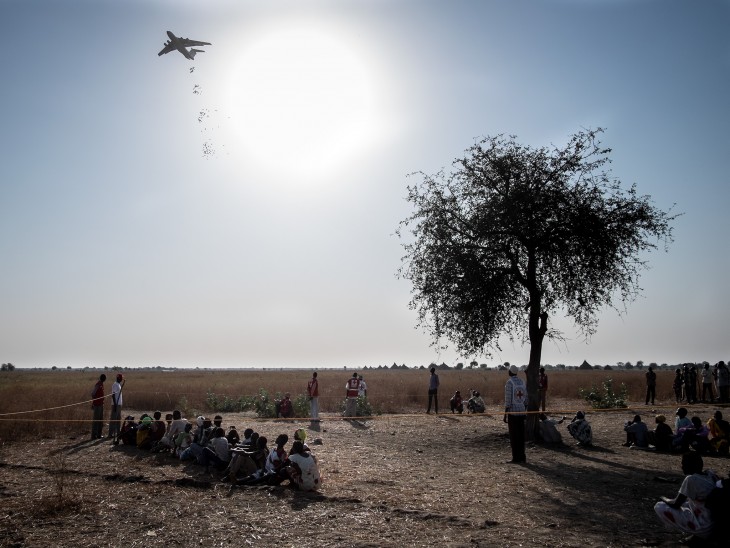 South Sudan. People wait for the ICRC to begin distributing aid as a plane drops food rations in the distance. CC BY-NC-ND/ICRC/Kristof Walgrave

South Sudan. People wait for the ICRC to begin distributing aid as a plane drops food rations in the distance.

South Sudan Red Cross volunteers and ICRC staff unload fishing kits from a plane for a distribution to take place that day.

South Sudan. A man who has just received a fishing kit examines the contents.