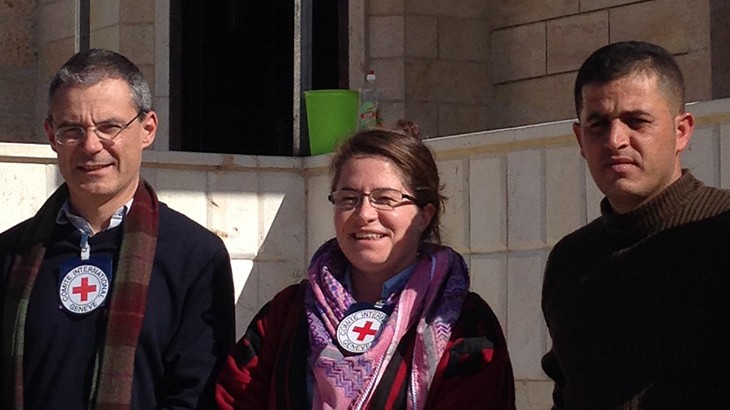 Aysha with colleagues on mission for the ICRC. CC BY-NC-ND / ICRC

Snakes. Scorpions. Dirty drinking water. These are the dangers that ICRC field delegate Aysha Michot faces when she travels into remote and isolated villages in South Sudan, an assignment she sought out because she wanted a challenge.

The 32-year-old field delegate from Belgium hops from village to village with a tent to live in and only a satellite phone to stay connected to the outside world.

Aysha calls her deployment to small villages in eastern South Sudan "strategic pre-positioning." She and her small team first establish relations with often-wary residents by carrying out activities to help the local communities, then trying to talk about international humanitarian law and first aid training.

The Murle people she interacts with are tall, thin and athletic. Many have few possessions.

"When you land in the ICRC helicopter half the village shows up," Aysha said. "The women love me because they think I'm crazy, walking around like a man even though I'm a woman.

Aysha wanted to work for the ICRC in part because of the diversity of activities that are carried out. As a field delegate, Aysha speaks with local authorities and armed groups. Seed distributions and cattle vaccinations are also on her South Sudan resume. Aysha recently helped coordinate activities in a field hospital alongside MSF and 25 volunteers from the South Sudan Red Cross who assist wounded patients and help residents separated from their family to reconnect with them.

"What's fascinating is to see other peoples' realities and what it means from my own perspective," Aysha said, explaining the challenges and positive experiences one gets from working in South Sudan. "You have contact with both the local authorities and armed groups. You get a great understanding of the dynamics in the country."

South Sudan is the second largest ICRC operation in the world, after Syria. Since the outbreak of fighting in South Sudan in December 2013, the ICRC has greatly scaled up assistance activities, providing more than 1 million food rations to residents in need and performing more than 5,500 surgeries at 15 health facilities. The ICRC has also provided more than 430,000 people with seeds and tools to plant crops, and has vaccinated nearly 600,000 livestock.