20 years after the historic treaty on landmines, we cannot afford to lose momentum. 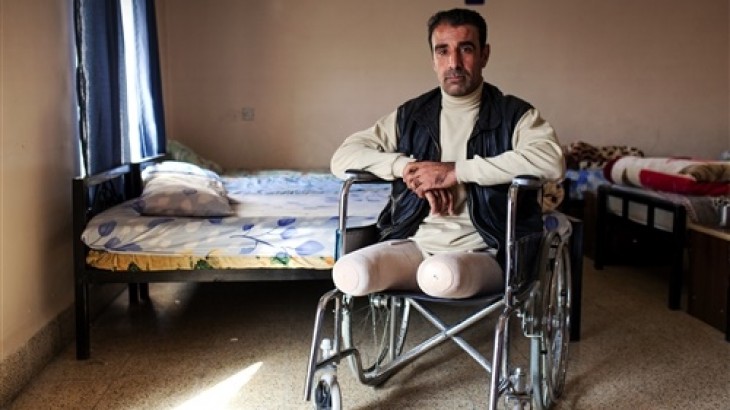 At the ICRC physical rehabilitation centre in Erbil, Iraq. This man, a plumber, was going to the market when an improvised explosive device exploded. He lost both his legs.

Twenty years ago anti-personnel mines were a regular and lethal feature of armed conflicts across the world. It did not matter to the weapons if the victim was combatant or civilian: they struck indiscriminately.

At that time a staggering 20,000 people, the vast majority civilians, were killed or mutilated by anti-personnel mines every year.

Amid a swell of global condemnation, one of my predecessors was incensed by the impact of these weapons, which he described as ‘abominable (and)… a destructive technology out of control’.

He called on the international community to uphold a ‘moral, political and legal obligation and to put an end to the mass destruction in slow motion’ caused by mines.

The global crisis of human suffering required a global solution: the Anti-Personnel Mine Ban Convention. It was the result of a remarkable partnership between states, civil society and international organisations, including the ICRC and the broader International Red Cross Red Crescent Movement.  And importantly, the treaty would not have been possible without the determined advocacy of landmine survivors themselves.

The treaty brought unprecedented attention to the plight of the people and communities affected by landmines and other unexploded ordnance. And it was extraordinary in its approach:

Today, the goal of a world free of antipersonnel mines is within reach. Over the last two decades, broad adherence to the treaty has seen:

And as a result, countless numbers of lives have been saved.

However, on this anniversary, I fear that we have reached a dangerous crossroads.

Landmine victims may not be on the front pages of the newspapers as they were in the 1980s and 1990s but today mine casualties are rising sharply in some countries. Anti-personnel mines, in particular improvised mines, are taking a heavy toll on civilians in places including in Afghanistan, Iraq, Myanmar, Nigeria, Syria, Ukraine and Yemen. Shockingly children account for 42% of all civilian casualties.

Today, 35 States remain outside of the Convention, and many of these have huge stockpiles, totalling an estimated 45 million units. I do not wish to think of the casualties if these weapons were ever used. I encourage all States that have not yet joined the Convention to continuously reassess the military need for anti-personnel mines in light of their severe human costs.  The global community of States and organizations that have supported the Convention over the past 20 years are eager to welcome you as State Parties and for this Convention to become truly universal.

The ICRC sees all too often in our hospitals and rehabilitation centres the injuries caused by mine blasts. We work to fit victims of explosions with prostheses for missing limbs and to help them live a full life. We help where we can, but frankly no one should have to suffer the lifelong trauma, pain, social and economic disadvantage that mine victims face. We also conduct, and will continue to do so, Mine Risk Education and support mine clearance to prevent accidents and reduce the effects of weapon contamination.

In 2014, States Parties expressed a determination to meet key goals of the Convention by 2025, that is, in just seven short years. There must be greater urgency and determination to ensure that these goals become a reality. Focused effort must be directed to make certain that by 2025:

Of critical importance is the commitment of funds to achieve these actions. I urge all State Parties able to do so to provide resources and exert influence where necessary. By 2025 the ICRC is advocating that affected States Parties are landmine free and with no new victims on their territories. No affected State Party should be left behind in this process. The international community must again use its collective determination, harness this remarkable partnership to overcome these challenges.  As the 2025 deadline approaches, there is not a moment to waste.

The Anti-Personnel Mine Ban Convention is a shining example of how the international community can collectively respond to widespread suffering caused by the use of indiscriminate weapons. Since its adoption, new treaties have followed to protect civilians from explosive remnants of war and to prohibit cluster munitions.  Short of developing new law, ensuring respect for existing IHL rules is critical to protect civilians from the indiscriminate effects of weapons.

In conflicts around the world the ICRC sees what happens when weapons are used without regard for civilian life, when the internationally agreed constraints of distinction, proportionality and precaution are disregarded. As we are witnessing in the ongoing armed conflicts in Syria, Yemen, Iraq, Libya, Somalia and Ukraine for example, the use of heavy explosive weapons in densely populated areas is having disastrous consequences for civilians. For example when a city is shelled the consequences are not limited to death, physical injury, but also include damage to critical infrastructure such as water and electrical facilities, hospitals and health services.

Given the enormous costs for civilians, the ICRC calls on all parties to avoid the use of explosive weapons with wide-area effect in populated areas, due to the significant likelihood of indiscriminate effects. All States should be in a position to apply this as a matter of good practice, to ensure better protection for civilians in urban warfare.

Today I call on the international community to harness the goodwill and common action that led to the adoption of the Anti-personnel Mine Ban Convention. I call on you to maintain vigilance against all weapons that cruelly and indifferently impact on civilians and for the wisdom of humanity, and humanitarian law, to prevail.