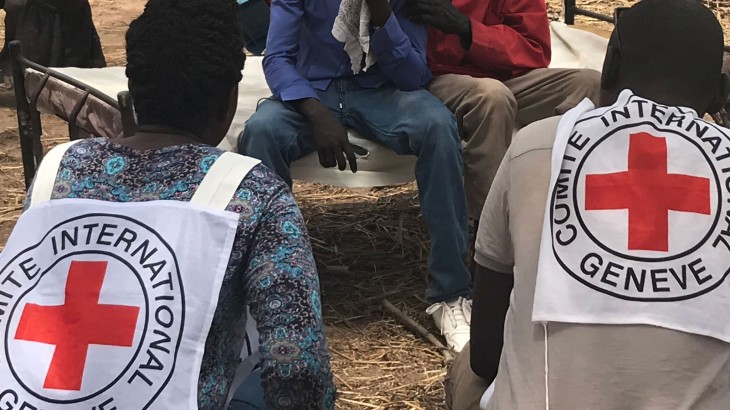 This was the moment Luminous was reunited with his family. As his family begins a new chapter in their lives, we continue to search for families of other children who have been separated by armed conflict and violence. CC BY-NC-ND / ICRC

Several years ago, young children were mesmerized by the appearance of a four-wheel drive vehicle that sped into their community with a group of armed men. The truck crisscrossed the main thoroughfares of the town, with its occupants carrying out one act of bravado or the other to the utter delight of the youths. Still impressionable, some young boys in the town were attracted by what they saw, and in circumstances not exactly clear, followed the truck and disappeared as it seemed, for life.

The families they left behind, were not even aware of where these children went and could not determine if they had travelled somewhere, been killed or abducted, or had wandered into the bush and devoured by some wild animals. Their period of disappearance became a nightmare.

For the children, they would suddenly find themselves in a camp belonging to an armed group. They were trained and armed and became part of a fighting force. They joined the group on its various expeditions until one fateful morning, they were captured by their adversary and taken away.

One of those captured was *Luminous Ramciel. He and other captured combatants were taken to a place of detention then separated later since they were children. After investigation, they were handed over to an international organization, which specilized in taking care of children. Later, they would be handed over to a Sudanese civil society organization, which takes care of children, and it promptly went ahead to enroll them in school. The ICRC was contacted about the children and the organization began looking for their parents and family members, deploying all its resources and the Red Cross and Red Crescent network.

In the intervening period between when they went missing and when word would get to their family members that they had been found, the anxiety of their loved ones knew no bounds. Where were they? What had happened to them? Had they been killed? Were they even in South Sudan from where they had gone missing? Would they ever be seen alive again? No one had an answer.

Imagine the sense of relief and utter joy and happiness that pervaded the homestead of his relatives when the ICRC got a breakthrough by successfully locating his family in Raja, 950 kilometres north west of Juba, South Sudan. Then commenced the processing and discussion of various aspects of the reunification process with the ex-child combatant and his family. To Luminous, it was just unbelievable that he would be going home and would actually see his family members again. He wondered if they would be able to recognize him again and what kind of reception he would get. He probably recalled his days growing up there and wondered too if any of his childhood friends would still be around and what they would look like now.

Finally, the day set aside for re-uniting Luminous arrived. It was a historic one, both for him and his family. He had been adequately prepared for the trip by the ICRC and dressed up for the occasion. Clad in a blue shirt, a pair of blue denim trousers, white sneakers and a pair of sunglasses, he did not look like the child who had disappeared from the town many years back. Still a child, yet he had grown as well and learnt a lot about life. He had been through very difficult circumstances but was lucky to be alive. Many of those with similar experiences as his did not live to tell the story.

Accompanied by an ICRC staff from the Khartoum delegation (the city where his trip was originating from), he flew on a commercial flight to Juba, to be received by the ICRC delegation there. From Juba he was transported in an ICRC aircraft to Raja, and from there in a Land Cruiser to his home town and into the waiting hands of excited family, relatives and friends. It was an emotional moment that Luminous and his family will never forget, thanks to the work of both the ICRC delegations in Khartoum and Juba.

As Luminous contemplates what the future holds for him in his country and in the loving arms of his family, the work of the ICRC continues, as the organization intensifies the search for the families of other children who have been separated from their loved ones by armed conflict and violence.

*Luminous Ramciel is an alias and not his real name.

Family re-unification is one of the important activities undertaken by the ICRC and its partners within the context of its protection programme.