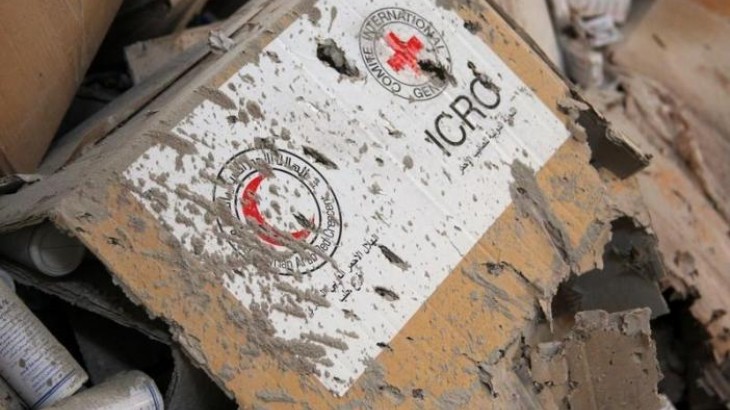 Around twenty civilians and one SARC staff member were killed, as they were unloading trucks carrying vital humanitarian aid. Much of the aid was destroyed. The attack deprives thousands of civilians of much-needed food and medical assistance.

"We're totally devastated by the deaths of so many people, including one of our colleagues, the director of our sub-branch, Omar Barakat. He was a committed and brave member of our family of staff and volunteers, working relentlessly to alleviate the suffering of the Syrian people. It is totally unacceptable that our staff and volunteers continue to pay such a high price because of the ongoing fighting," said the SARC President, Dr Abdulrahman Attar.

"From what we know of yesterday's attack, there has been a flagrant violation of International Humanitarian Law (IHL), which is totally unacceptable. Failing to respect and protect humanitarian workers and structures might have serious repercussions on ongoing humanitarian operations in the country, hence depriving millions of people from aid essential to their survival", said Peter Maurer, the ICRC President.

"Today, the Red Cross and Red Crescent is in mourning. In solidarity with the Syrian Arab Red Crescent, we are calling on the international community to ensure the protection of humanitarian aid workers and volunteers. We are not part of this conflict," said Tadateru Konoé, the President of the IFRC.

Syria is one of the most dangerous conflicts for humanitarian workers in the world. During the past six years, 54 staff and volunteers of SARC have lost their lives whilst carrying out their duties.

The International Red Cross and Red Crescent Movement repeats its demand that all parties to the conflict adhere to the rules of international humanitarian law, which includes protecting aid workers.