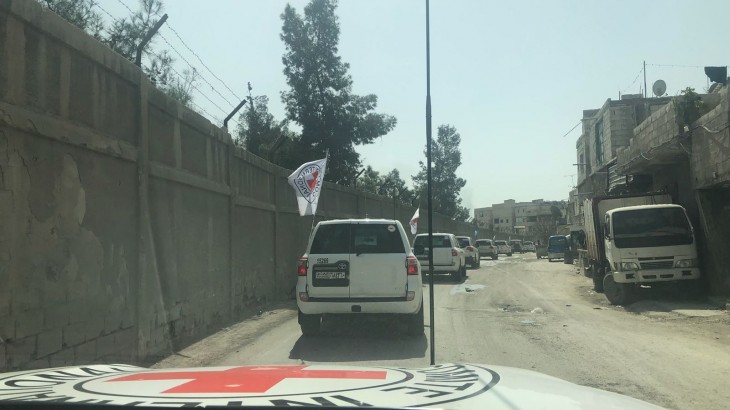 After multiple attempts in recent weeks to gain humanitarian access to Eastern Ghouta, the ICRC finally reached the town of Douma earlier today as part of a joint aid convoy with the Syrian Arab Red Crescent and the United Nations.

The 46-truck convoy includes 5,500 food parcels for over 27,500 people (one food parcel should last a family of five a month), along with vital medical and surgical items such as dressing materials.

"The convoy is a positive first step and will lessen the immediate suffering of some civilians in the Eastern Ghouta region. But one convoy, however big, will never be enough given the dire conditions and shortages people are facing. Repeated and continuous humanitarian access is essential and more must be granted in the coming period," said Robert Mardini, the ICRC's Middle East director.

The last time the ICRC was able to deliver aid in Eastern Ghouta was on 12 November 2017.

During the past weeks of intense fighting, many people in Eastern Ghouta have lost their lives – because of the fighting or because they had no access to medical care. Seeking shelter from continuous bombardments, families have spent days hiding in underground shelters with very little food to sustain them.

Hospitals, houses and facilities belonging to the Syrian Arab Red Crescent have been hit and continue to be targeted. This is unacceptable.

Damascus city has also not been spared. Many neighbourhoods have come under mortar attack in the past weeks, with civilians killed and wounded.

The ICRC has repeatedly called for all sides in Syria to respect the laws of war, which are being ignored. Today, we again urge parties involved in the conflict to take every precaution to spare and protect civilians.

Note to editors:
Interviews with staff on the ground in Eastern Ghouta are not available currently due to connectivity issues. We expect the convoy to return to Damascus today in the late evening.