Jordan: ICRC continues to assist Syrians at the northeastern border 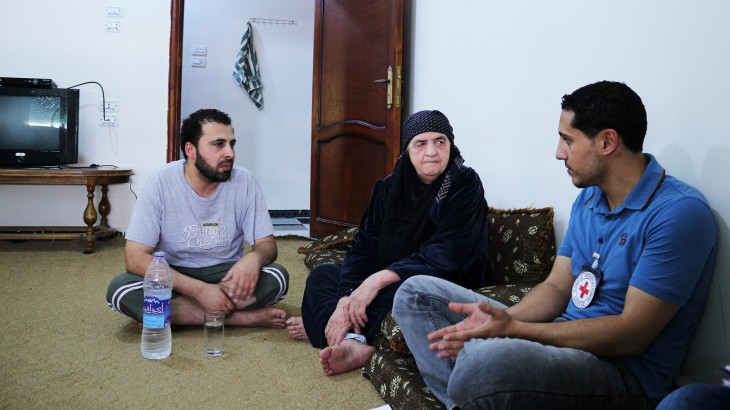 An ICRC staff member chats with a woman who has benefited from a cash transfer programme in Mafraq on how the support from ICRC has helped her family and whether they have any further needs. CC BY-NC-ND/ICRC/Asil Sari

With the Syrian crisis showing no signs of abating, people continue to cross into Jordan through the northeastern border seeking safety and international protection. The vast majority are children, women and the elderly who initially live in makeshift shelters in difficult conditions at the border.

The International Committee of the Red Cross (ICRC) continues to provide them with food, water, hygienic items and basic medical supplies. It also helps them restore family contact with their relatives in Jordan and elsewhere. Once they are allowed to proceed further into Jordan, people are accommodated temporarily at four ICRC-supported transit sites where their basic needs are attended to before they proceed to the Raba'a Al Sarhan Registration Centre.

"By the time they reach the border, most people are exhausted and desperately need help of all sorts," said Frédéric Fournier, head of the ICRC delegation in Jordan. "In addition to food and water, which the ICRC is doing its utmost to provide on a daily basis, the ICRC strives to ensure that those needing urgent medical attention, including pregnant women or those affected by chronic diseases, can quickly access proper medical care inside the country."

During the past three months, the ICRC has distributed more than 360,000 meals and trucked 6,600 cubic metres of potable water to the people in the northeastern border area.

Facts and figures – July through September

Working in partnership with the JRCS

A sick Syrian refugee is transferred from the ICRC-run medical facility at Raba’a Al Sarhan Registration Centre in Mafraq.

Jordan Armed Forces members take part in a two-week training course on the law of armed conflict in Zarqa.