Syria: "Nobody wants to live near a hospital in Aleppo" 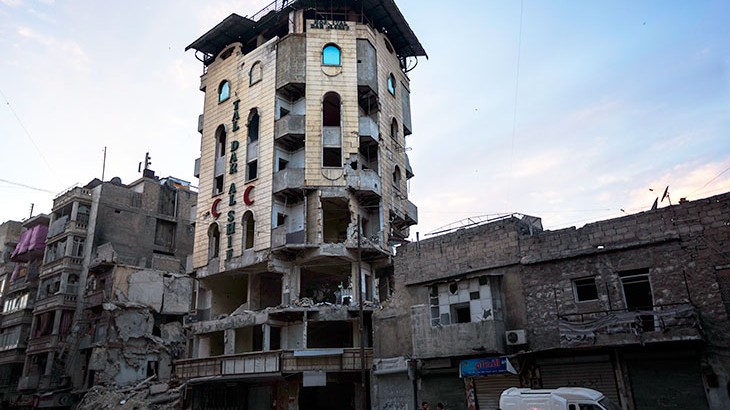 "Nobody wants to live near a hospital in Aleppo." Javier Senent, president of the Spanish Red Cross

That's how Spanish Minister of Foreign Affairs José Manuel García-Margallo summed up the tragedy of a city devastated by five years of civil war in an article published in Spanish newspaper El País on 24 May. In the previous weeks, six of the few remaining functioning health-care facilities in Aleppo had been destroyed and several patients and health-care professionals killed, including one of the last paediatricians left there.

The horrific images of hospitals in Syria, Afghanistan and Yemen razed to the ground are still fresh, and yet other attacks on health-care services are already taking place. The World Health Organization recorded 594 such incidents resulting in 959 deaths and 1,561 injuries between January 2014 and December 2015 in 19 countries experiencing emergencies.

Can we afford to get used to seeing hospitals bombed and health-care personnel attacked? We must strongly reject the possibility that these incidents generate indifference or even acceptance. It is time to reaffirm that wars have limits.

That's why we welcome the adoption of United Nations Security Council Resolution 2286. Unanimously adopted on 3 May 2016, this resolution on protecting medical facilities and personnel was sponsored, among others, by Spain. It fully embraces one of the priorities of the International Red Cross and Red Crescent Movement: protecting access to and safe delivery of health care for people affected by conflict or other emergencies.

The resolution strongly condemns acts of violence, attacks and threats against the wounded and sick, medical personnel and humanitarian personnel exclusively engaged in medical duties, their means of transport and equipment, hospitals and other health facilities.

But most importantly, it demands that all parties to armed conflicts fully comply with their obligations under international law to ensure the respect and protection of all health workers and facilities, and to do so by taking concrete measures.

The resolution largely reflects the framework already set forth by Resolution 4 of the 32nd International Conference of the Red Cross and Red Crescent in December 2015. Both resolutions send an important and powerful signal: that the laws regulating armed conflicts remain as relevant as ever, and both will be invaluable for bolstering the work that awaits us. After all, the real work to comply with those laws must be done on the ground and has only just begun.

What concrete measures do these resolutions urge member States to take? To develop their national legislation in order to comply with their obligations under international humanitarian law; to collect data on obstruction, threats and physical attacks on medical personnel, transport and facilities, and to share challenges and solutions; to investigate and, where relevant, prosecute attacks; to train military personnel in their legal obligations; to support and facilitate the work of local and international health organizations; to enhance legal protection for patients and health workers, for the ethical principles of health care and for the red cross and red crescent emblems; and to monitor this issue by means of the reporting mechanism entrusted to the UN Secretary-General.

On 3 May, 49 international and national organizations, including the International Committee of the Red Cross (ICRC) and the Spanish Red Cross, representing over 30 million health professionals and humanitarian workers around the world, spoke with one voice and urged all UN member States to immediately follow up on the commitments undertaken with the adoption of UNSC Resolution 2286 and Resolution 4 of the 32nd International Conference.

In the meantime, we will continue to mobilize other organizations and individuals. We need other voices to join ours – until we are heard and those measures are implemented; until hospitals everywhere are a safe haven again.

"The Spanish Red Cross is member of Health Care in Danger, an initiative of the International Red Cross and Red Crescent Movement to make access to health care and its delivery safer in armed conflict or other emergencies. This initiative calls for the respect and protection of health-care workers, facilities and vehicles and the implementation of a series of recommendations and practical measures to safeguard health-care services and their humanitarian mission.

For more information, visit the Health Care in Danger website.

What can you do to help?