Syrian refugees in Jordan: Fear, anxiety and hope – all part of daily life 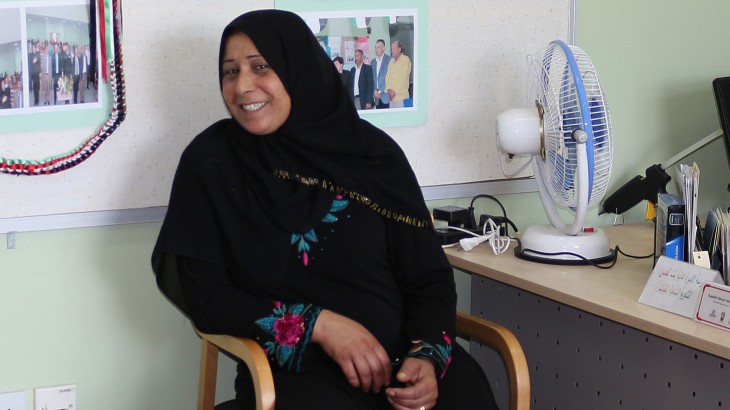 For Syrian refugees living in Jordan life is a daily struggle. Humanitarian assistance makes their lives a little easier, but life is a constant mix of fear, anxiety and hope for a better future.

Three years ago, Um Nawwaf's family was living in Ghouta, Syria, which at that time was rocked by shelling. Fearful for her children, she fled to Jordan, while her husband stayed in Syria. She now lives alone with her five children in a small apartment in Mafraq governorate.

"I will never forget that day when my daughter was looking for a place to hide as the shells were falling around us," recalls Um Nawwaf. "She fell on a rock and hit her head and since then she has been suffering from epilepsy. That was the final straw – we simply had to move."

For the past two years Um Nawwaf has been receiving support from the ICRC through its cash assistance programme (see box below). "We wait patiently for each monthly instalment," she says, adding, "Without this life-saving assistance, our situation would have been dire." 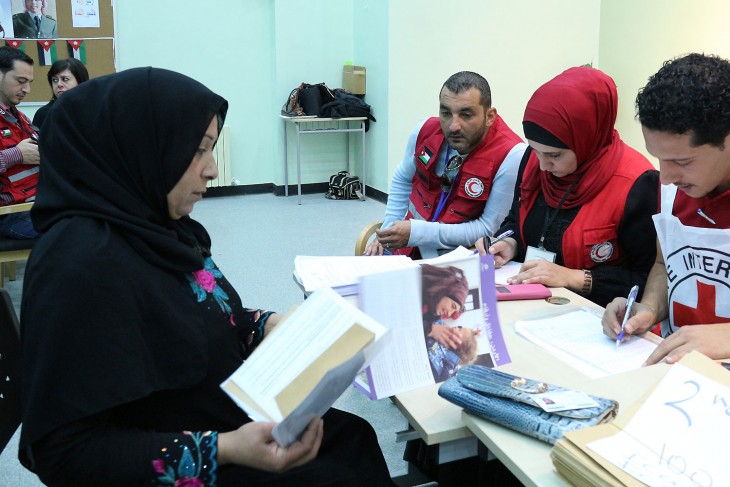 Mafraq, Jordan, Um Nawwaf waits to receive a cash machine card from the ICRC and the JRCS, with which she will be able to withdraw the money they are making available to her. CC BY-NC-ND /ICRC/A. Sari

Um Nawwaf describes how hard it is to be a refugee: "I can barely afford to put a roof over my head. My son Nawwaf had to drop out of school and find a job to help me with the expenses." Barely holding held back her tears she says: "My heart breaks every time he leaves for work. He's only 13 years old."

She describes the feeling when she gets a text message telling her that the money has been deposited in her bank account: "The money helps us pay the rent, fuel and electricity bills, in addition to buying food and other essential items. It makes our lives bearable."

With a glimmer of hope in her eyes, Um Nawwaf says: "I wake up every day telling myself that this is a temporary situation and that things will get better soon. I hope so."

Most of the Syrian refugees living in host communities in Jordan depend on aid provided by humanitarian aid agencies. With the protracted nature of the conflict, many of the refugees have exhausted their savings and other assets and, with the arrival of winter, the pressures of daily life can only multiply.

The ICRC and the Jordan Red Crescent Society are helping Syrian families in Mafraq and Madaba governorates cope with their increasing needs through a cash assistance programme.

Some 3,000 Syrian families, the majority of whom are female-headed households, have been benefiting from the programme, through which they receive monthly cash instalments – the amount dependent on the size of the household – paid via a local bank. On average, the amount is USD 100 per household and is intended to cover various daily expenditures. In addition, over the four months of winter, the supported households receive four instalments, each worth USD 150, to cover heating-related expenditure. 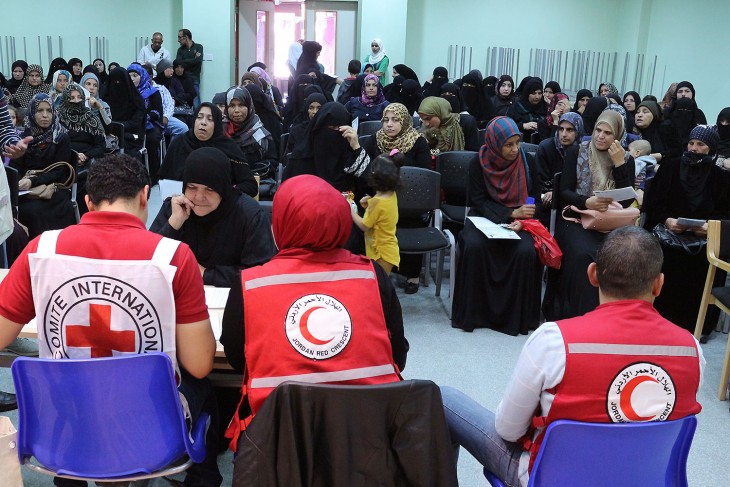 Mafraq, Jordan. The ICRC and the JRCS distribute cash machine cards to Syrians, mainly to women who are looking after their families on their own. CC BY-NC-ND /ICRC/A. Sari