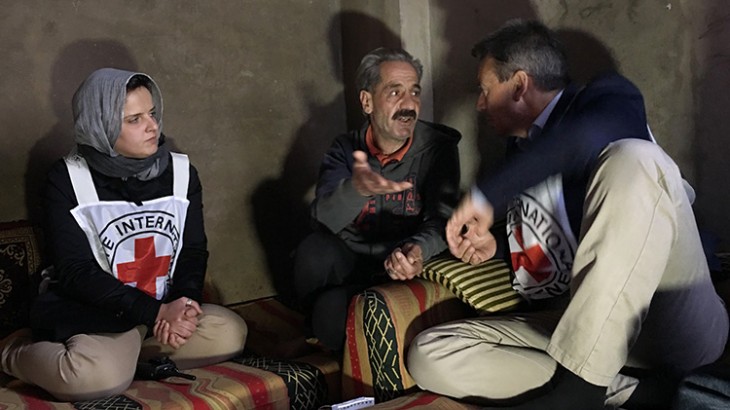 President of the ICRC, Peter Maurer, and head of operations in Homs, Majda Flihi, visit with Khaled, a resident at a shelter for internally displaced persons in the zone of Al Waer, Syria. CC BY-NC-ND / ICRC / P. Krzysiek

The president of the International Committee of the Red Cross (ICRC), Peter Maurer, has urged the parties to the Syrian conflict to allow aid deliveries to all people in need and to continue to work towards a political solution to end the suffering of millions of people. He said there needed to be a concerted effort by all those 'with influence' to bring to an end the devastating war which is entering its sixth year.

"After five years of fighting, Syria has become the emblematic war of the early 21st century", said Mr Maurer. "It is highly complex and volatile. There is a plethora of armed actors and weapons. In many areas, civilian infrastructure, including water, electricity and health facilities, has been destroyed or severely damaged. This has led to massive suffering for the people, with millions forced to flee their homes owing to cruel urban warfare."

Mr Maurer left Syria today after a 5-day visit during which he met senior Syrian officials including the Prime Minister, Deputy Prime Minister and Minister of Local Administration, as well as the Ministers of Interior, Health, Water Resources, National Reconciliation, and the Deputy Minister of Foreign Affairs. He also met the leadership and volunteers from the Syrian Arab Red Crescent (SARC).

He visited Al Waer and the Old City of Homs as well as Yelda, Babila and Beit Sahem in Rural Damascus, where tens of thousands of people have been struggling to survive. In Al Waer, Yelda and Babila, he met civilians who have been affected by the situation and community leaders and committees representing the armed opposition.

"The most urgent thing is to increase humanitarian aid. The ICRC, together with SARC, has consistently expanded its operations, but humanitarian needs are growing even faster. We want to do more, for more people. Humanitarian deliveries must not depend on political negotiations but must be allowed to continue and increase regardless of any truce or ceasefire."

"I urged the Syrian authorities to take immediate and practical steps to allow for an expansion of humanitarian work. Without it, more people will be forced to flee their homes inside Syria, into neighbouring countries and beyond. In my meetings with Syrian officials, I raised our concerns regarding access to besieged and other hard-to-reach areas and the impartial delivery of timely and unimpeded aid to all those who need it. In addition, I indicated our readiness to expand our visits to places of detention, pending authorizations."

"I also underlined the right of the wounded and sick to receive medical care and the obligation of all involved in the violence to respect medical personnel, facilities and vehicles. Furthermore, families need to know the fate of missing loved ones. This is an area where the ICRC can offer extensive experience."

"It is time for the warring parties to end this horrendous conflict and for the world powers who can influence the situation to act decisively. Violations of international humanitarian law are a constant and terrible feature of the war in Syria. These violations lead to unimaginable and unnecessary suffering," said Mr Maurer.