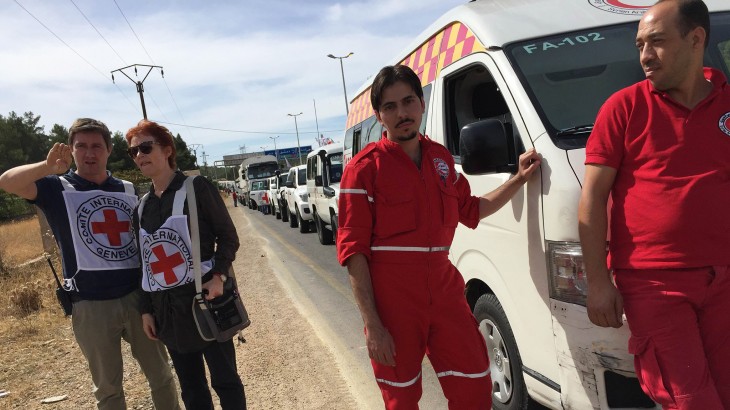 Damascus (ICRC/SARC) – The Syrian Arab Red Crescent (SARC) and the International Committee of the Red Cross (ICRC), together with the United Nations, have delivered lifesaving medical items to treat seriously injured and sick patients in the besieged towns of Zabadani and Madaya in rural Damascus. Simultaneously, SARC delivered relief items to the besieged towns of Foua and Kifraya in northwestern Syria's Idleb governorate.

A total of 31 trucks of various relief items were delivered to these besieged areas, scene of very heavy fighting in the past months, with little or no humanitarian aid being delivered to 40,000 people trapped in there.

Help us do more in Syria!

"This operation to provide assistance to the besieged people in these areas had been in the planning for a number of weeks as a result of ceasefire agreement reached between various parties involved in the fighting," said Marianne Gasser, the ICRC's head of delegation in Syria, who was part of the convoy that went to Zabadani.

"The original plan had envisaged a much larger humanitarian intervention from the ICRC and the SARC", she continued, "however, yesterday the ICRC- SARC joint teams only delivered lifesaving medical items sufficient to treat seriously injured and sick patients. Together with SARC, we remain ready to play our role as neutral humanitarian intermediaries for such missions".

"Humanitarian aid, access to medical care and the protection of health and humanitarian workers must be kept out of the politics of the Syrian conflict," said the president of the Syrian Arab Red Crescent, Dr Abdul Rahman Attar. "This operation shows that agreements can be reached in Syria which put the lives of civilians first."

In Syria, the ICRC and its main partner, the Syrian Arab Red Crescent, provide humanitarian assistance to millions of people in some of the areas worst hit by the fighting. Neither SARC nor the ICRC was part of the UN-facilitated political negotiations which led to the ceasefire enabling the relief deliveries. The role of the two organizations is to act as neutral intermediaries to provide humanitarian aid to wounded people and civilians caught up in the fighting.

> More on the Syria crisis