Geneva / Damascus – The International Committee of the Red Cross (ICRC) says the civilian population in the city of Aleppo is undergoing enormous suffering because of deliberate cuts to water and electricity supplies. Around two million people live in the city but many, on both sides of the front lines, are having severe difficulty in accessing water.

"Vital services for the people, such as the water supply, must be kept away from the politics of the Syrian conflict," said the head of the ICRC delegation in Syria, Marianne Gasser. She recently returned from Aleppo, where she met Syrian authorities and crossed the city's frontline to discuss the issue of water availability with the parties involved in the fighting.

The water supply in Aleppo depends on the operation of pumping and electricity stations but each is controlled by different warring parties. The operation of the stations is often used in a way to put pressure on the other side. "Too often in Syria, water becomes a tool in the hands of fighting parties. It becomes a weapon of war. And it is civilians who suffer the most. Access to water should be unconditional," said Ms Gasser.

A similar situation exists in Damascus where cutting the water supply has been used as a tactic to exert pressure on the other side. Five years of conflict have severely affected the country's water infrastructure. As much as half of the total production capacity has been lost or damaged. 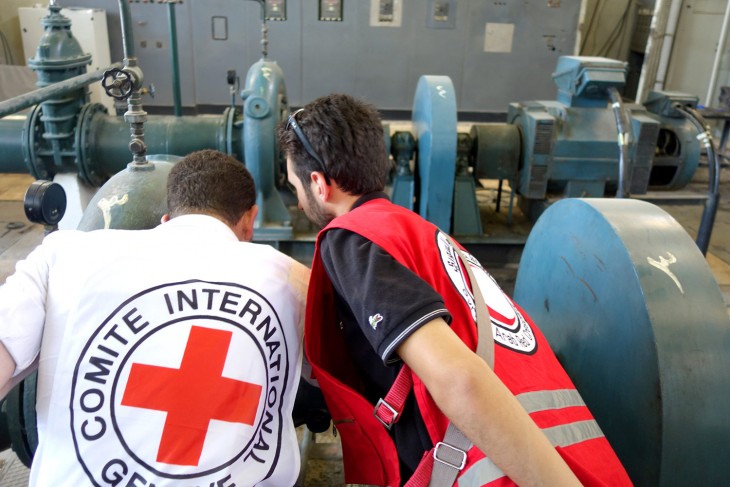 Throughout Syria, the ICRC and the Syrian Arab Red Crescent (SARC) have been doing their best to support the maintenance of water supplies in close collaboration with water boards on both sides of the front lines. In Aleppo the ICRC and SARC have created a contingency network of boreholes on both sides of the front lines which help with the supply. Between January and June 2015, 16 million people across Syria benefited from water projects organized by the ICRC and SARC.