They remain as life-saving as always: PNG reflects upon 70 years of Geneva Conventions 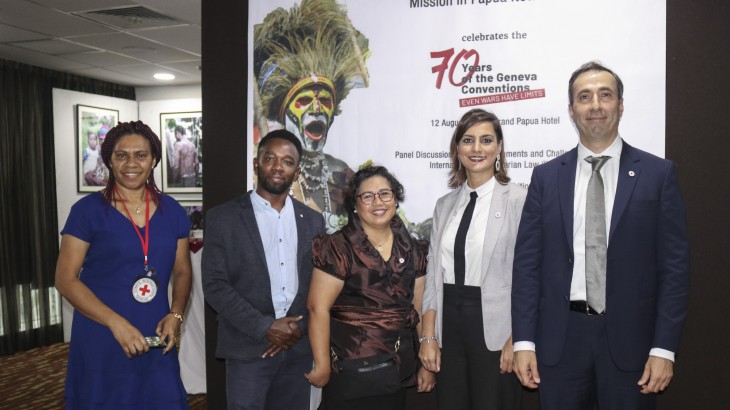 Port Moresby (ICRC) – The International Committee of the Red Cross (ICRC) mission in Papua New Guinea will host celebrations to mark 70 years of the Geneva Conventions on 12 August in Port Moresby. Among others, the key activities will include a panel discussion on the success, challenges and emerging trends in the application of Geneva Conventions and a photo exhibition on humanity and tribal conflict in PNG.

The four Geneva Conventions of 1949 protect all people affected by armed conflict, even non-international ones, irrespective of race or religion.

In one of his key messages, ICRC President Peter Maurer said, "This is not about anniversaries or debates on legal phrasing, it is about protecting people from the worst of the wars which rage today. It is about laws that assert that as long as conflict remains a reality, there also must be a limit to suffering."

Talking about why the Conventions remain as necessary and life-saving as they were intended to be, head of the ICRC's mission in PNG Ahmad Hallak said, "The laws of war continue to be violated in conflicts around the world, leading to a perception that they are neither respected nor relevant. But that would be wrong and dangerous to believe. Minimizing the protective power of international humanitarian law risks creating a vicious cycle where violations are seen as banal and inherent to warfare. We need to fight this and reiterate that violations are unacceptable and they are avoidable."

"The focus on violations also risks overlooking the thousands of times when the law has been complied with. For instance, the times when fighters have refrained from attacking civilians and key infrastructure like hospitals and water systems, the times when detainees have been treated humanely, the safe access provided to wounded people at the checkpoint or the number of times that children have been provided with food," Hallak added.

As the ICRC, we witness the everyday achievements of international humanitarian law that may not always be visible to the public. In such instances, it is clear that respect for IHL is possible and that its implementation makes a meaningful difference. Created for the worst of times, the Geneva Conventions preserve the core of our common humanity.