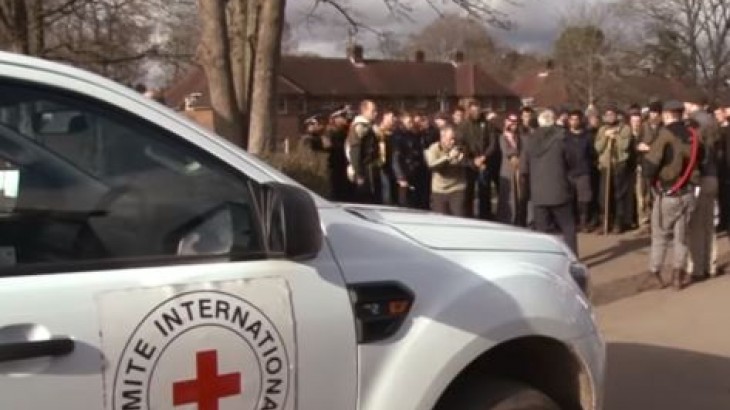 Newly-recruited soldiers are interacting with the ICRC during field-based training exercises here in the UK – ahead of likely encounters when deployed overseas.

A key priority for the ICRC's London-based team is to maintain and enhance its ongoing dialogue with the UK military. This dialogue includes focus on the operational implementation of International Humanitarian Law (IHL), also known as the laws of war.

It includes workshops and lectures on the ICRC operations, key humanitarian concerns and challenges for the respect of IHL to personnel from all branches of the military.

Ian McLeod has worked for the ICRC for 20 years. He is a retired brigadier who most recently spent time with the new recruits at the Royal Military Academy Sandhurst, at Longmoor Camp, Hampshire.

McLeod explained the ICRC's presence to those taking part: "We're trying to get across what we are - we are a neutral, independent, impartial humanitarian organization whose role is to protect and assist the victims of conflict and other situations of violence.

"Sometime in the future you may, on some disputed barricade, scarred slope or battered hill meet the ICRC and you'll say 'Well, we know roughly what these guys are up to'.

"Neutrality is very important for us, so we have to be seen to be helping the victims, not siding with anybody."

The officer cadets also feel that they are benefiting from the experience of 'meeting' an ICRC delegate on the ground, during the simulated exercise.

"Having a chance to engage with them before we get into the big, wider army is invaluable to us," said one.

Major Rebecca Macklin, who was responsible for running the complex training operation for nearly 200 officer cadets, spoke to the British Forces Broadcasting Service about how cadets benefit from such exposure:

"Bringing the International Committee of the Red Cross in helps build on the training they've already had. We find that you can teach it but actually if you do it in an exercise scenario like this it cements that understanding."

Mark Brailsford, deputy head of the UK & Ireland delegation said, "It's a mutually beneficial exercise. Armed forces personnel and the ICRC could well encounter each other in operational contexts. So even before boots get on the ground, this gives us a chance to expose them to the ICRC and what we do, which can be critical in giving us the access we need to carry out our work, sometimes in very complex situations."

In addition to taking part in field training exercises, workshops and lectures, the ICRC also participates in seminars, meetings and roundtables with the UK armed forces all year round.