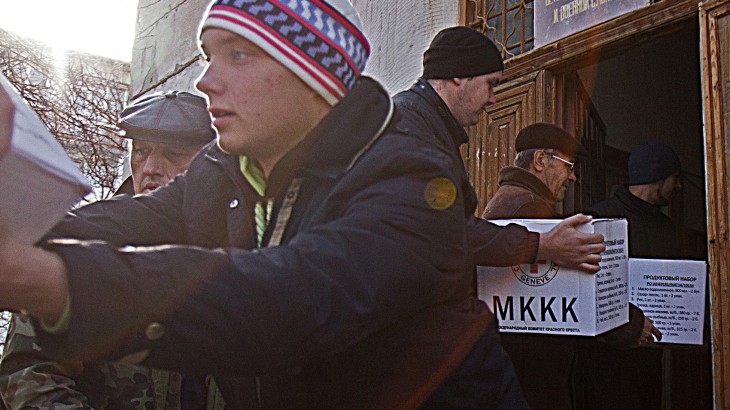 The ICRC visited people held in connection with the conflict and violence to monitor the treatment they receive and the conditions in which they are being held:

Dialogue with the parties to the conflict

The ICRC is maintaining contact with all parties to the conflict regarding the conduct of hostilities. In particular, it is urging them to refrain from attacking civilians, civilian objects and medical facilities, and to allow health services to carry out their duties.

The ICRC recently conducted a seminar for 17 police officers responsible for providing public security in the Odessa region. The seminar covered the applicability of human rights and humanitarian principles in law enforcement operations. The ICRC held another seminar on international human rights law and humanitarian principles for 20 officers of the Security Service of Ukraine (SBU).

Following an assessment of the situation in the Donetsk and Lugansk regions, the ICRC produced and distributed 150,000 leaflets and 3,000 posters to raise awareness of the risks posed by explosive remnants of war

To support the authorities' efforts to clear explosive remnants of war in the Donetsk and Lugansk regions, the ICRC donated metal detectors, protective aprons, visors and other equipment to the State Emergency Service of Ukraine.

Cooperation with the Ukrainian Red Cross

The ICRC has given the Ukrainian Red Cross supplies and technical support for the first aid and other humanitarian services it provides in emergencies.

With the help of the ICRC, the Ukrainian Red Cross erected a tent warehouse in Mariupol and renovated another in Kiev.

Cooperation with the Belarus Red Cross

The ICRC has given the Red Cross Society of Belarus about half a million US dollars to provide 3,000 displaced people from Ukraine with winter clothes and food. In January 2015, the Belarus Red Cross started distributing food vouchers to displaced people in Belarus.

In addition, the ICRC is helping to strengthen the Society's emergency-response capacity by replenishing its emergency stock, paying rent and other fees, training volunteers, etc.

Cooperation with the Russian Red Cross

In the Rostov region, which is hosting around 38,000 people displaced from eastern Ukraine, the ICRC has provided 60,000 US dollars' worth of supplies to the local Russian Red Cross branch to bolster its capacity to help these people.

The ICRC is organizing training for staff and volunteers of the Rostov branch. 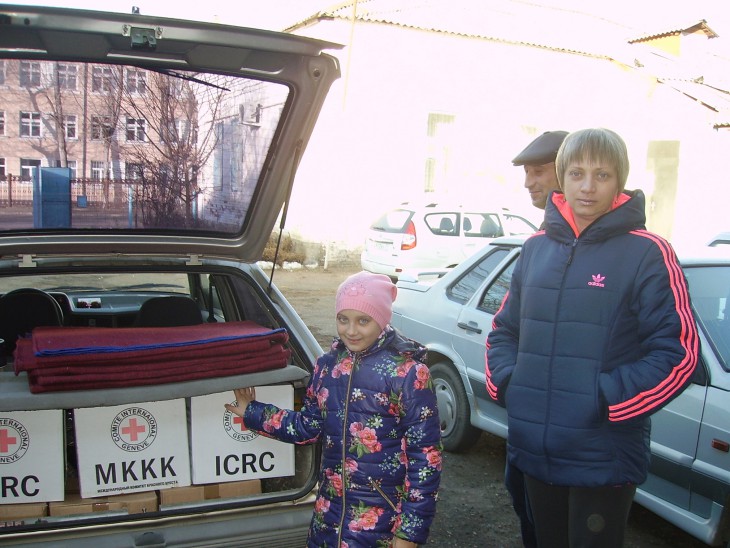 The ICRC has delivered food parcels and hygiene items to the Russian Red Cross for distribution in December 2014 and January 2015 to 10,000 Ukrainian displaced people living in Krasnodarsky Krai and Adygea.

In the northern Caucasus, the ICRC is working with the Russian Red Cross to provide people displaced from Ukraine with food, other essentials and financial support. By the end of 2014, about 1,000 people had received assistance from the ICRC in Chechnya, Dagestan, and North Ossetia.

The ICRC is working with the Russian Red Cross to restore contact between family members separated by the conflict.

The ICRC is providing local Red Cross branches with aid for further distribution to people who have fled violence in eastern Ukraine. Since November 2014, the ICRC has delivered food parcels and hygiene items for 10,600 displaced Ukrainians. Overall, about 49,000 people received humanitarian aid in Crimea in 2014. A new series of aid distributions for 9,000 people has already started.

The ICRC is helping to boost the capacity of local Red Cross branches, for example by providing them with vehicles and funding aid distributions.