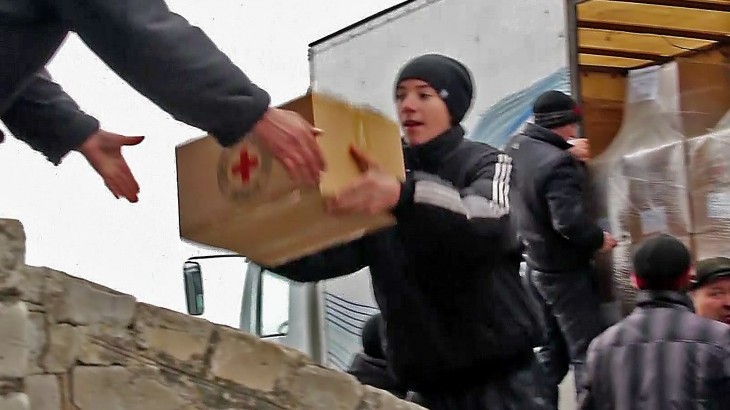 Geneva / Kiev / Moscow (ICRC) – ICRC President Peter Maurer today completed high-level talks in Moscow and Kiev, in which he focused on the severe humanitarian crisis in eastern Ukraine and urged the governments of both countries to ensure that vital aid reaches people in need. During a four-day visit to the region, he met with President Vladimir Putin and President Petro Poroshenko, and senior officials of both countries.

"I received a commitment from both President Poroshenko and President Putin that civilians affected by the conflict would have access to humanitarian aid. The implementation of the Minsk agreement will therefore allow the ICRC to further increase humanitarian assistance in the weeks to come," said Mr Maurer. "This conflict has caused unacceptable bloodshed, and ordinary people are paying the price. We hope that the ceasefire will hold, and we stand ready to provide expert advice for an international mechanism that will channel humanitarian aid to conflict-affected areas. However, the parties to the conflict must be in charge of this mechanism."

The conflict in eastern Ukraine has claimed the lives of at least 6,000 people and shattered untold others. "We have yet to grasp the full impact of this fighting," said Mr Maurer. "Half the population of eastern Ukraine has been displaced. People are still burying their loved ones and searching for missing relatives and friends."

Mr Maurer also expressed his concern about the weapons that had been used so far in the conflict: "Rockets, artillery and mortars have no place in residential streets and squares. The likelihood that their use in populated areas is imprecise and indiscriminate is so high that civilians inevitably suffer the consequences."

Civilians living on or near the front line have been subject to heavy rocket and artillery shelling. Humanitarian access to these areas is paramount. Hospitals, schools and other key infrastructure have been badly damaged and essential services disrupted. This, coupled with the existing economic crisis in the region, means that reconstruction is a daunting task. The effects of the conflict will be felt for years to come.

Since the onset of the hostilities, the ICRC has been striving to work on both sides of the front line, bringing aid to those most in need and urging all parties to spare the civilian population and infrastructure. But addressing existing needs will require a concerted effort by all sides. "Amidst very public accusations and counter-accusations, the plight of the people is being forgotten," said Mr Maurer. "The extreme polarization of this conflict is being fuelled by these accusations. That's why I stressed the importance of respecting neutral, impartial and independent humanitarian action during our talks this week."

The ICRC president added that the exchange of prisoners between parties to the conflict was another welcome provision of the Minsk agreement. The ICRC stood ready to act as a neutral intermediary and had offered its services to all parties. Since September 2014, the ICRC has been visiting government-run detention facilities and aims to step up its access to people detained on both sides, with a view to monitoring their conditions and treatment.