Universal jurisdiction is key to ensuring serious violations of IHL are prevented, investigated, or repressed 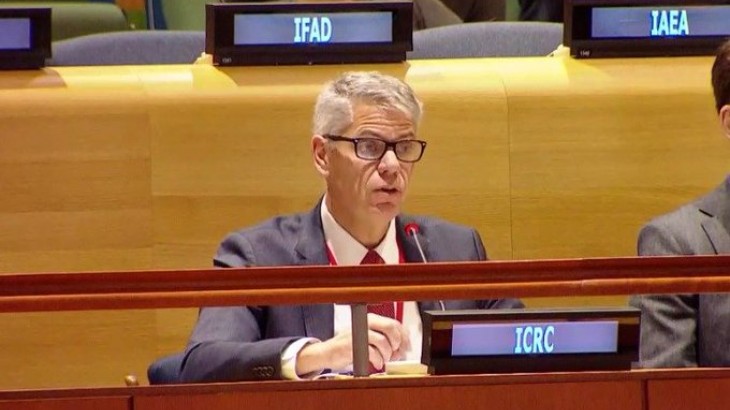 This year we mark the 70th anniversary of the adoption of the four Geneva Conventions of 1949, which each include "grave breach" war crimes provisions. The International Committee of the Red Cross welcomes the continued interest of the United Nations General Assembly in the principle of universal jurisdiction, including in respect of war crimes, and takes note of the Secretary-General's most recent report on this issue, to which we contributed.

The principle of universal jurisdiction is one of the key tools for ensuring that serious violations of international humanitarian law are prevented and – when they do occur – are investigated and, if appropriate, repressed.

Other international instruments place a similar obligation on States Parties to vest some form of universal jurisdiction in their courts over serious violations of the rules contained in those instruments. These include, for example, the 1954 Hague Convention for the Protection of Cultural property in the Event of Armed Conflict and its Second Protocol of 1999, the 1984 Convention against Torture and Other Cruel, Inhuman or Degrading Treatment or Punishment and the 2006 International Convention for the Protection of All Persons from Enforced Disappearance. In addition, State Practice and opinio juris have helped to consolidate a customary rule whereby States have the right to extend universal jurisdiction to other serious violations of IHL. These include, in particular, serious violations of Article 3 common to the four Geneva Conventions of 1949 and of Additional Protocol II of 1977, as well as other serious violations of IHL, including those listed in Article 8 of the [1998] Statute of the International Criminal Court.

States have the primary responsibility for investigating allegations and prosecuting alleged perpetrators of serious violations of IHL. When some States do not take legal action, however, the exercise of universal jurisdiction by other States can serve as an effective mechanism to ensure accountability and limit impunity.

The ICRC welcomes the ever-growing increase in domestic prosecutions based on universal jurisdiction for serious IHL violations. According to the information available to the ICRC, since 2018, extra-territorial investigations in relation to international crimes alleged to have been committed in situations of armed conflict, have been initiated or resumed by national prosecution services in Argentina, Austria, Belgium, France, Germany, Norway, Sweden and Switzerland. In addition, at least 15 trials are pending or are ongoing in Austria, Belgium, Finland, France, Germany, Spain, Sweden, Switzerland, the Netherlands, and the United Kingdom, and at least 9 judgments have been delivered by domestic courts on the basis of universal jurisdiction in Finland, France, Germany, the Netherlands, and the United Kingdom.

Such efforts demonstrate that universal jurisdiction is in fact part of the toolkit used by States to effectively address prevailing impunity gaps and move towards accountability for serious violations of IHL perpetrated beyond their borders, in past or ongoing armed conflicts. The ICRC hopes that more States will continue to join these efforts, which sends an important message to victims and survivors that accountability is not just an aspirational goal.

As mentioned in previous statements, the ICRC continues, upon request, to support States both in strengthening their national criminal legislation and in establishing universal jurisdiction over serious violations of IHL. We also produce technical documents and practical tools on the application of universal jurisdiction, the purpose of which is to assist States to better understand this concept and find ways to translate it into their domestic framework.

We will continue to follow, with great interest, the discussion on the principle of universal jurisdiction in the Sixth Committee and in other United Nations forums. Finally, the ICRC reiterates its readiness to continue engaging with and supporting States' efforts to ensure greater respect for IHL, including in this area.

Thank you very much, Madam Chair.