Answers to the most frequently asked questions 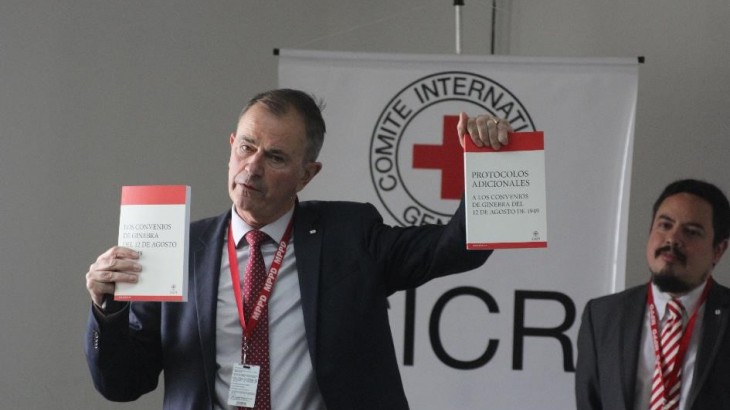 A workshop on the use of force and international humanitarian law with the Venezuelan Armed Forces in May 2017. CC BY-NC-ND / ICRC

Do you know why it is a mistake to classify the protests as an armed conflict?

For a situation to be considered an "armed conflict" under international law, the following conditions must be met:

To sum up, for a situation to be considered an armed conflict, there must be clashes between armed groups with a military-style degree of organization, weapons and fighting capacity, which is not the case when the police intervene in protests and violence breaks out. In legal terms, we say that these situations "do not reach the threshold of an armed conflict".

Does international humanitarian law (IHL) apply in situations where there are protests and violent incidents?

No, IHL does not apply. In these situations the following apply: international human rights law, known more commonly as just "human rights", which protects all people, at all times; international standards on the use of force (in law enforcement and law and order operations); and the country's domestic laws.

In cases where IHL does not apply it means that the four Geneva Conventions and their three Additional Protocols do not apply. IHL only applies when there is an armed conflict – international or non-international. It seeks to limit the means and methods of warfare used by the parties to the conflict in order to protect people (and their property) who are not participating in the conflict or who are no longer participating (those who are wounded, sick, captured, etc).

Can the Geneva Conventions be "activated"?

No, they cannot. The Geneva Conventions apply when there is an armed conflict, just as other rules of international law – such as human rights – apply without needing to "activate" them.

What is the ICRC's role?

The ICRC is an independent, neutral organization that endeavours to protect the lives and dignity of victims of armed conflict and other situations of violence and to provide them with humanitarian assistance. We take action in response to emergencies and, at the same time, promote compliance with international humanitarian law and its implementation in domestic legislation.

The ICRC's role is to share its concerns about the people affected by such events as part of a direct, confidential dialogue with the authorities and other relevant parties. It is important to stress that we work according to our principles of neutrality, humanity, impartiality and independence; we do not take sides or express an opinion about the ideas of any of the parties involved.

We also have the task of disseminating and promoting international standards on the use of force and international humanitarian law, which we do by offering advice and encouraging measures to implement them. For that purpose, ICRC teams conduct workshops with Venezuela's armed and security forces.

In light of our mission, principles and confidential working approach, we have supported the Venezuelan Red Cross's efforts to administer first-aid during the protests in recent months. For example, we have provided the means for volunteers to move around, as well as basic surgical supplies and bottled water to hand out. We are constantly evaluating how our contributions can be put to the best possible use to alleviate the suffering of people affected by these situations.

It is not the ICRC's job to investigate, denounce or judge. That work falls to the courts.