A village in eastern Ukraine remembers its past 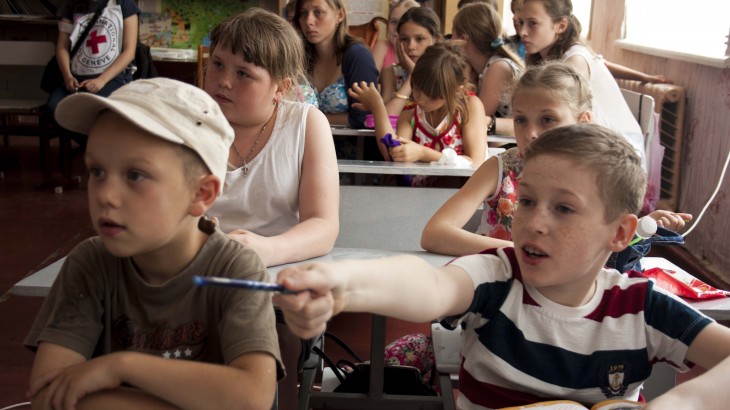 Zaitseve: Mine Risk Education during a summer camp at Zaitseve school. Maxim is in the front row with his hand raised. CC BY-NC-ND / CICR /Jessica Barry

It is hard to imagine any conflict in the sleepy village of Zaitseve. Unfortunately, the rural community has spent the past 80 years steeped in violence – first during World War II, then in Afghanistan, and now on its doorstep in Donbas. The line of contact between areas of the country controlled by the Ukraine government and non-government controlled areas in today's ongoing conflict lies just a few kilometres away.

On the top floor of the village school, poignant souvenirs and memorabilia of past decades of village heroism and loss are on display in a small museum. It is something that teacher Viktoria Aleksandrovna Bardokova, who studied in the same school more than 20 years ago, is keen for the students to reflect on in the context of their own experience of war.

“I bring the children here for their history lessons,” Mrs Bardokova explains. “I want them to know about their past.”

For the school’s 50 pupils, who range in age from seven to 17, the danger posed by mines and unexploded ordnance along the contact line is never far away. Experts in Mine Risk Education (MRE), including the ICRC, have visited the school to talk about the dangers, and to pass on messages about safe behaviour.

“I know exactly what to do if I see something on the ground that I don’t recognize,” boasts nine-year-old Maxim, during a recent MRE session organized by the ICRC in a summer camp at the school.

“Don’t touch!” he yells, adding, “And I must tell my parents what I’ve found.” His freckled face breaks into a smile.

“And what if you see a toy lying somewhere near a checkpoint or on the road?” asks the ICRC field officer.

“I mustn’t pick it up or even touch it,” Maxim replies confidently, whilst other children attending the session nod approvingly. 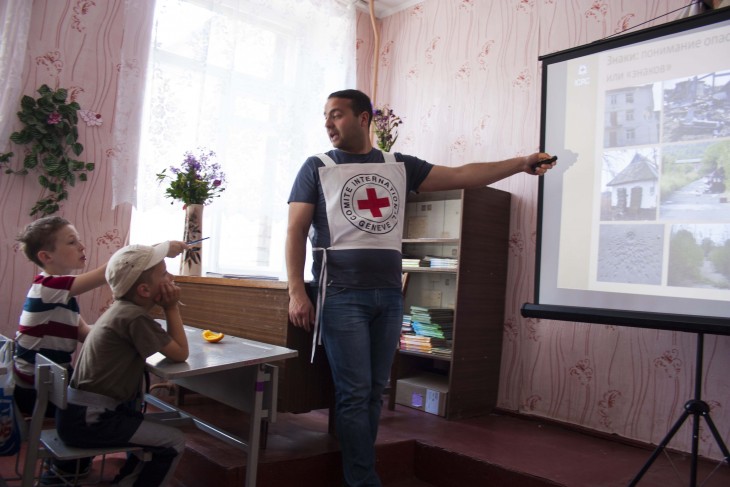 Zaitseve: Maxim (left) was confident about keeping himself safe from the dangers of mines and other remnants of war. CC BY-NC-ND / CICR /Jessica Barry

In the school’s third floor museum, fading sepia images of the men and women who took part in WWII stare out from the walls. Some of them never came back from the fighting. The names of the dead, engraved on a memorial, runs to a hundred or more. Pupils have found their grandfathers’ names. There are also letters on display from soldiers written to their families, from the front lines.

On another shelf lie testimonies of the 11 or 12 men from the village who fought in Afghanistan, when Russian forces were present in that country for ten years from 1979. One of them, an 18-year-old army recruit at the time, was awarded a medal for heroism, and is now the mayor of Zaitseve. But not all the material in the museum is about conflict. There are also photos and documents recording a more tranquil rural existence, as well as examples of traditional handicrafts and paintings by a local artist.

“The biggest change I see in Zaitseve is its size,” confides Mrs Bardokova, looking around the airy room, which collates the village’s past. “Today there are little more than 1,000 people living here. That is why it’s so important to keep our history alive.”

With the conflict in eastern Ukraine not yet over, it is too soon to predict how the upheaval, separation and loss amongst communities, along the front lines, will be remembered in this small room that is filled with memories and farewells. But it will surely be recorded at some point by the future generations. It may even feature notes on what Maxim and his friends are being taught today to help them keep safe from mines and other explosive remnants of the war that haunts the nearby woods and fields.