The breach of humanitarian rules persists in Colombia 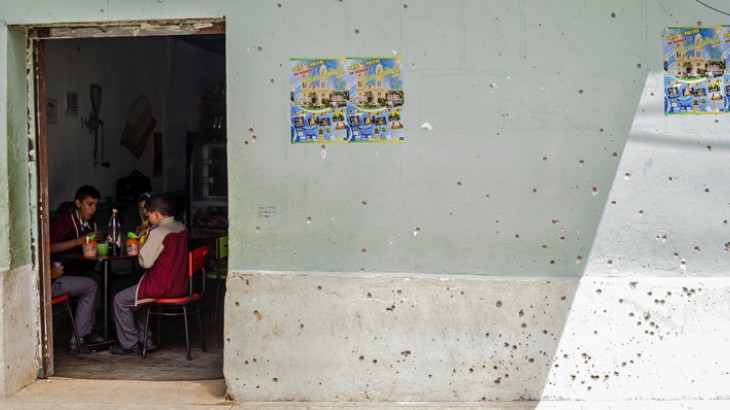 The homes in San Calixto, Norte de Santander, have marks of grenade shrapnel and other ammunition. Andrés Cortés / CC BY-NC-ND

"I see peace is too far away," Johana replies when asked about her life after the Peace Agreement signed between the Colombian government and the FARC-EP. "There was no calm or ceasefire for us. We never knew what that was," says this resident of San Calixto, in the region of Catatumbo, Norte de Santander, where there is presence of several armed groups. One can see behind her that the wall of her home in the town's main square is full of holes left by bullets and shrapnel from grenades.

Despite the undoubted improvement in the humanitarian situation of the country, the feeling of this mother was also felt in many other regions of Colombia in 2016, where the ICRC recorded 838 alleged violations of international humanitarian law (IHL) and other humanitarian principles that affected more than 18,600 people. The Organization was concerned at the fact that 40% of these incidents affected women and children.

Catatumbo, home to Divanid, also shows the aftermath of crossfire. One can see also broken roof tiles and traces of gunfire on the walls. Whenever there is a confrontation, she takes her children and leaves town for a while. "But when we can´t leave, we stay under the bed ... there is no other way," she says while recalling the August 2016 gunfire that left everyone terrified. "We are afraid to leave the house. We hear a door that closes too hard and we thinks it's a bombshell," adds Divanid.

For those who have spent their lifetime in Catatumbo, the optimism of peace that is felt in the rest of Colombia is rather limited by the obvious challenges people like Johana and Divanid face every day. In this region, as in many other regions of the country, the presence of armed actors and their effects on the civilian population keep the community amidst a tense calm that when it breaks, it reminds the country that the conflict may have ended for some, but not for everyone.

Therefore, the humanitarian action of the ICRC has not stopped for a second. Last year, 152,000 people benefited from the work done both in the most inaccessible areas of the country and in complex urban centers where victims of the armed conflict and violence also live. Not turning back on our duty to alleviate the suffering of the country is as relevant today as it was when we arrived to Colombia more than four decades ago.

Prospects and challenges for 2017

The bilateral ceasefire between the government and the FARC-EP brought about a significant reduction of armed confrontations. Some areas of the country that used to suffer the effects of constant clashes now witness a situation that has improved significantly.

However, progress in humanitarian concerns needs more speed and concrete actions to respond to the victims. We need sustained political will for those affected by such a long conflict, so they may receive the response and attention they deserve.

Our experience in the field indicates that one of the greatest challenges the country will face in the coming years is the ravages of armed violence in areas where there is presence of different armed groups. Some urban areas where we work such as Medellin, El Bagre and Buenaventura have been severely affected by this phenomenon.

Another priority, still in effect after the signing of the Final Agreement is the clarification of the whereabouts of thousands of people who have disappeared and continue to disappear today due to conflict and violence. An aggravating factor is that it is impossible to calculate the real magnitude of the phenomenon. While the National Register of Missing Persons has documented 24,900 victims of alleged forced disappearance, a report by the Center of Historical Memory ensures that there are over 60,600 people missing.

Every war leaves behind unresolved issues. However, disappearances should not be forgotten, even if they took place decades ago. It is a duty not only for those authorities that are responsible but also for the country as a whole. It is an obligation of every Colombian to be supportive towards the families awaiting news of their loved ones.

Another concern of the ICRC is the silence and fear surrounding victims of sexual violence in the context of conflict and violence. This silence translates into significant underreporting of information; as it is expressed by the victims themselves who shared their stories with the ICRC. The emotional and physical scars left by this practice prohibited by IHL will never disappear. During 2016, there was an alarm on cases of collective rapes and its impact on several generations. Sometimes grandmothers, mothers and daughters share a tragic history of aggression.

Another consequence thousands of Colombians still suffer is the presence of improvised explosive devices and explosive remnants of war. This type of hazard is a latent danger in urban and rural areas where the effects of war have been suffered for decades.

Although some regions in the country have already benefited from demining programs, it will take decades to clean the affected territory. Additionally, there is no accurate data on the size and location of these threats; plus, the direct victims and their families need support and assistance throughout a great deal of their lives.

The everyday reality on the ground reminds us constantly that the presence of these artifacts is an ongoing challenge. On September 26, 2016, the same day the country was witnessing the signing ceremony of the Agreement between the Government and the FARC-EP in Cartagena, a child died and another one was wounded as they walked through an area contaminated with explosive devices in a pathway at Algeciras, Huila. Considering the unrest people feel in a country where every step they take can be a risk, it is important to strengthen prevention and humanitarian aid to those who have had to restrict their mobility and change their way of life because of the fear of these artifacts.

Finally, the Colombian State must promptly address the humanitarian problems arisen from the crisis in the prison facility system. During 2016, the detention conditions of individuals deprived from their liberty in Colombia did not improve, but rather worsened in some cases. This demonstrates the unwillingness of the State when facing its obligations to more than 119,500 detainees in the country. 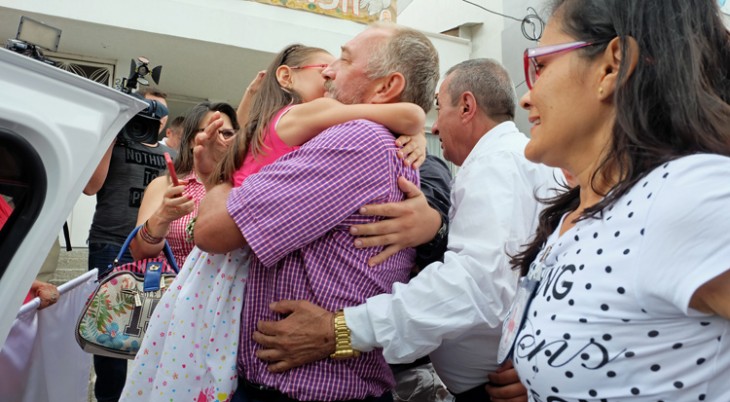 Civilian released on October 6, 2016 in the rural area of Saravena, Arauca (eastern Colombia). During2016, 27 people who were being held by armed groups returned to see their loved ones thanks to ICRC's neutral intermediation. Clara Lorena Araújo/ICRC/CC BY-NC-ND

Beyond words in paper

"Peace is not just to put the guns down, but the State must also help civilians. We don't have any roads or aqueduct here, there are no jobs, there is no work. This all creates violence," said a community leader in Arauca who declined to be named. "What's going to happen to us?" He asked. Many of the communities we worked with in 2016 share this same question.

2017 also marks the beginning of the public phase of the talks between the Government and the National Liberation Army (ELN), a valuable approach in which humanitarian concerns should be at the top of the agenda.

Concerning the discussions Colombia must face as a country, the call from the ICRC is to focus on victims and on the urgent changes needed in areas historically affected by the conflict. Collective indifference towards these issues may turn peace into a fragile promise.

For as long as armed violence remains to be a reality and hostilities continue to affect civilians, we will continue the dialogue with all parties to the conflict to avoid possible humanitarian violations such as what we saw in 2016. Day after day we support people most affected by this violence. People like Johana, in the heart of Catatumbo, who had only one wish when asked about her expectations for the future: "I ask that we be heard, so that these things don't just remain written in paper".

IHL remains in force after the Peace Agreement

While the international humanitarian law (IHL) applies to the parties involved in an armed conflict, these rules may be in force even after the signing of a Peace Agreement. Additionally, the Colombian State remains in conflict with multiple armed actors: the ELN (Ejército de Liberación Nacional), the AGC (Autodefensas Gaitanistas de Colombia, and the EPL (Ejército Popular de Liberación).

The conflict with the FARC-EP entered a termination phase with the Final Agreement, and it will end when there is no risk to resume hostilities; and combatants are disarmed. However, it is important to bear in mind that the dissidence of the FARC-EP could be a source of new conflicts.

On the other hand, the parties have obligations under IHL beyond the end of hostilities, such as the demining of the territory, the search for missing persons or the obligation to investigate and punish those responsible for war crimes. In this context, humanitarian aid will continue to be important to save lives in communities that suffer the consequences of violence.

Therefore, the ICRC avoids referring to this historical moment of the country as "post-conflict" and prefers the expression "post-agreement". Deeming the conflict as something overcome will take time, considerable resources and political will from all parties.

Our role in the Peace Agreement

After more than four years of dialogue between the Government and the FARC-EP, we were pleased to see that in the midst of the political discussion, it was possible to include humanitarian issues. Throughout this time, we have participated neutrally and independently with logistic support in the development of the talks and the implementation of concrete actions in the field such as the recovery of the underage fighters who had been recruited by FARC-EP.

We also have a role in the humanitarian agreement to expedite the search for the missing. We work with both parties to get information on the location, identification and a dignified recovery of these people.

We will continue to work to streamline and receive more answers to the needs of victims. After more than five decades of confrontation, there is still a long road ahead. 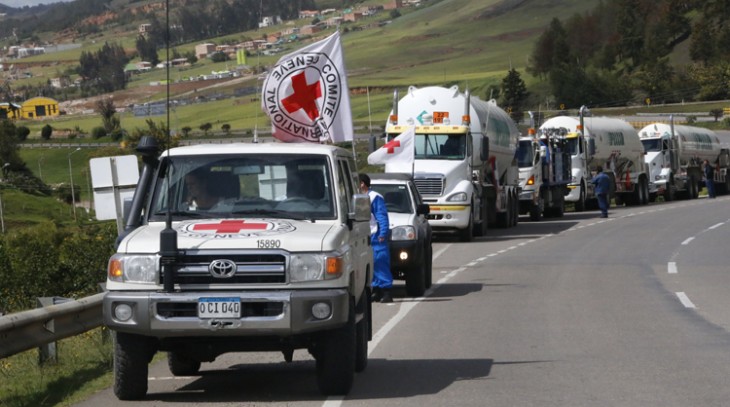 In Boyacá (center of Colombia), the immediate response was key to respond to shortages of medical centers. Diego Alejandro Bravo / Colombian Red Cross

During the social mobilizations the country experienced in mid-2016, health institutions in Cauca, Boyacá and Nariño suffered from shortages of basic medical supplies.

In response to the emergency, the ICRC and the Colombian Red Cross worked together to organize humanitarian caravans with oxygen, drugs and blood units, amongst other items.

A similar situation took place in the Caquetá municipalities of Valparaíso, El Paujil and Doncello during the demonstrations of the third quarter last year. The ICRC supported local hospitals, provided guidance, and financial assistance so that people who were injured had access to health services and care protocols.

All these situations served to remind the authorities and social leaders of the limits on the use of force, in addition to the importance of respecting the Medical Mission and to protect the health workers that save lives every day.

← BACK TO ICRC COLOMBIA