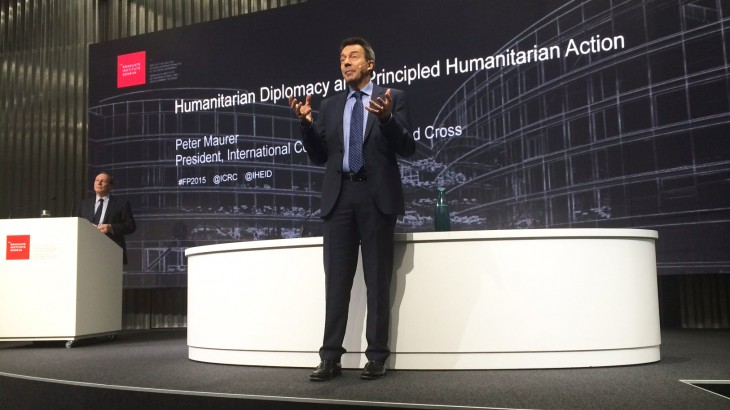 “The principles of humanity, impartiality, neutrality and independence have been at the heart of all major humanitarian operations for over a century. And yet, questions arise today about their relevance in addressing new and emerging challenges in a broadening humanitarian agenda.”

Those were the reflections of ICRC President Peter Maurer, as heard in his speech at Geneva’s Maison de la Paix on 2 October 2014, during a conference organized by the Geneva-based Graduate Institute of International and Development Studies. Maurer’s words herald a global discussion about the principles which have guided the action of the International Red Cross and Red Crescent Movement for over 150 years.

While a growing variety of humanitarian actors endorse humanitarian principles in practice, a lack of common understanding, or even misleading or politicized uses of these principles, risks jeopardizing the scope and scale of humanitarian action. “The concepts as well as practices of ‘Principled Humanitarian Action’ are increasingly being challenged in current conflicts,” and “parties to the conflict themselves may explicitly desist from this project of ‘shared humanity’,” warns Maurer.

The debate about humanitarian principles is a very pragmatic one. It deals with “some of the most sensitive dilemmas” confronting us in the real world, namely, setting priorities in situations of overwhelming needs; fulfilling a commitment to humanity while taking into account the stark realities of power; and accessing populations in need while maintaining the safety of humanitarian personnel.

The seven “Fundamental Principles of the International Red Cross and Red Crescent Movement” are the expression of a set of values and experiences distilled from over a century and a half of protecting the lives and dignity of victims of armed conflict worldwide. The seven principles are humanity, impartiality, neutrality, independence, voluntary service, unity, and universality.

Faced with misinterpretations, distortions, and politicized or sometimes blatant rejection, the humanitarian principles are at the forefront of the current humanitarian debate; and they will be high on the agenda of the 32nd International Conference, the Red Cross and Red Crescent’s supreme deliberative body.

In the run-up to the Conference, the ICRC’s Second Research and Debate Cycle on Principles Guiding Humanitarian Action will gather key actors during high-level conferences to be held on several continents, starting in September 2014 and running throughout 2015.

Through the debate about humanitarian principles and their concrete operational implications in the field, the ICRC hopes that all parties to a conflict will, in the words of Maurer, “recognize their shared humanity”, as represented in the goals of humanitarian organizations present on the ground. Only through this recognition and dialogue will the ICRC be able to intervene to help affected populations.