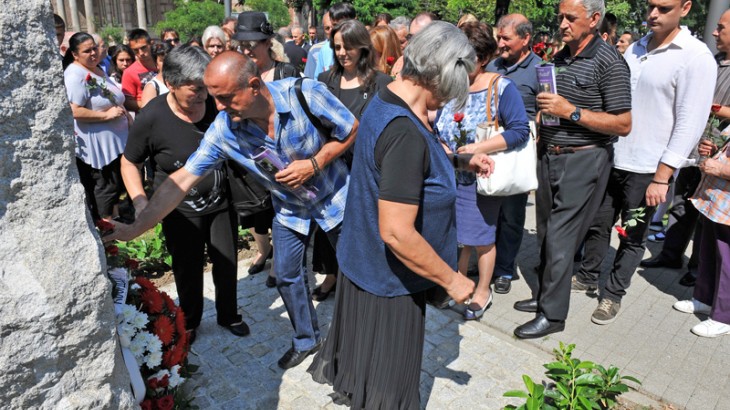 30 August 2014: Families of missing persons lay wreaths and flowers on a memorial

Belgrade/Pristina (ICRC) - The working group on persons unaccounted for in connection with events in Kosovo between 1998 and 1999 held its 38th session in Belgrade today. Officials from Belgrade and Pristina brought the group up to date on progress and exchanged information on the steps they were taking to clarify the fate of the 1,655 people who were still missing.

The session, the fourth one this year, was chaired by the ICRC and was attended by representatives of the families of the missing persons, the Red Cross and the international community.

The chairperson, Lina Milner of the ICRC, said, “Important progress has been made this year, particularly with regard to the location and exhumation of the Rudnica gravesite: the remains were gathered and identified; afterwards, they were handed over to the families concerned. The process, to which almost all this year’s efforts were directed, brought solace to 52 families in Kosovo. Locating the gravesite was a direct result of the joint efforts, within the framework of the working group, of various parties concerned.”

Belgrade institutions were in charge of leading the work at Rudnica, a village in the Serbian municipality of Raska which was carried out in a coordinated and transparent manner. It was done with professional local and international forensic teams from Belgrade, Pristina, EULEX, the ICRC and the support of the international community. Owing to speedy DNA analysis by the International Commission on Missing Persons, the families concerned were informed without delay.

A total of 68 missing-persons cases have been solved this year, making it possible for the families in question to close this painful chapter of their lives and move on. But the authorities have been exceedingly slow in dealing with the cases of the 1,655 persons still unaccounted for – after 15 years – and the consequences weigh heavily on families from all communities and on the society as a whole.

After ten years, the working group’s efforts have resulted in reducing the number of unsolved cases from 3,200 to 1,655. For further progress to be made, uninterrupted and constructive dialogue between Belgrade and Pristina – on humanitarian grounds and without political rhetoric – is essential;  it is equally important that the authorities meet their obligations with regard to the families’ right to know the fate of their missing relatives, as laid out in international law. This should lead to more information being exchanged on the location of gravesites and result in greater accountability of the authorities to all the families of the missing still waiting for answers.