When war comes to town 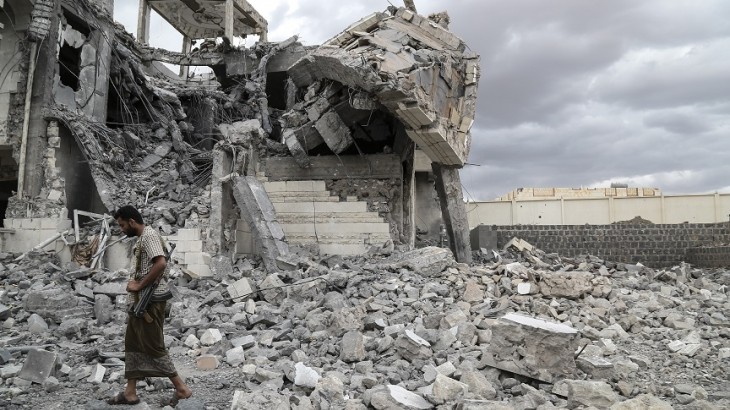 Sana'a, Yemen: buildings lie in rubble after the fighting.

Tonight, I will start with the broader picture: conflict dynamics and the humanitarian impact of conflicts have shown worrying trends in the last couple of years. We have seen:

These trends all have made the lives of civilians more complicated and difficult and the resulting impacts are clear:

The urbanisation of warfare is one of the important factors contributing to an overall bleak picture. Throughout this year, the ICRC has therefore been generating a global conversation on war in cities to better understand the drivers and humanitarian implications and to deepen our operations and policy response.

Cities and urban areas are intrinsically more vulnerable and warfare and violence is therefore more impactful. This is particularly worrying in contexts characterised by poverty and weak infrastructure.

The heavy burden carried by civilians, when wars are fought in cities is of great concern. Basic infrastructures are heavily affected in urban contexts: health, water, sanitation, education. The cumulative effect of prolonged fighting with successive degradation of infrastructure adds to the list of problems.

Rapid urbanization, which is an important social and economic phenomenon, also means we see conflicts increasingly being fought in densely populated areas.
War today is associated to names of cities: Aleppo, Kandahar, Mogadishu, Donetsk, Aden, Ramadi, Sanaa, Fallujah, Kunduz. Around the world, it is estimated that some 50 million people suffer the effects of urban warfare.

What should be done? Two questions need better responses:

On the first question, we build on increasing evidence: if International Humanitarian Law was better respected during urban warfare, civilian harm would drastically decrease.

The ICRC therefore urges parties to urban conflicts to ensure respect for IHL during urban warfare by:

To further elaborate:
A critical principle of IHL is that parties to the conflict are not entitled to use unlimited methods and means of warfare. The licence to attack is linked to military advantage.
The choice of weapons is constrained by the general rules of distinction, proportionality and precaution.

For example, while heavy explosive weapons are rarely a cause of particular concern when used in open battlefields, they become problematic when they are used against military targets in densely populated areas. In such places, they are prone to indiscriminate effects that go well beyond the target, with devastating consequences for civilians.

We need therefore to scrutinize how distinction, proportionality and precaution apply in densely populated areas in light of increasing evidence of the direct and indirect effects.

Given the enormous costs for civilians, only a more ambitious and consensual interpretation can possibly deliver better protection. We must also make sure that more rigorous interpretations are appropriately translated into military manuals for the situation of densely populated areas.

And we need to sharpen the notion of military advantage in the light of decade-long protracted conflicts.

With regard to mitigating the impact of violence in urban settings, we need to adapt to transformations of the needs of people.

While the ICRC once responded to emergency crises, we are increasingly present in protracted armed conflicts for decades. Today, we must deliver a wide range of services – from fixing and set up water infrastructure, to supporting hospitals and orthopaedic centres or bringing in mobile health clinics. From traditional humanitarian services to supporting sustainable small businesses through cash grants.

Besides the images of killing and destruction, urban warfare today leaves also more invisible scars on entire societies, such as generations deprived of education, psychological trauma or prolonged displacement. In Syria, every minute, more than three people are forced to flee. More than six million live in ad hoc shelters or host communities within Syria, while nearly five million have left the country.

The longevity of problems is further compounded by more structural fragilities due to urbanisation. More than 1.5 billion people, including 350 million of the world's extreme poor, live in places of ongoing fragility, violence and conflict.

People in fragile cities face a concentration of risks: income inequality, poverty, youth unemployment, violence, criminality, and natural disasters. They are exposed to gang violence or terror attacks. When fragility deepens, the end result is mass displacement of people, and sporadic violence that can spiral into more organised resistance and even full-blown conflict.

With 96% of urban growth predicted to take place in these fragile cities by 2030, I can only anticipate this will be a huge challenge for us all into the future. This leads me to the conclusion that urban settings, more than any other, need new approaches in marrying short and long-term, individual and systemic, humanitarian and development methodologies.

In that sense I hope that the panel can discuss both: