When will the phoenix rise again? 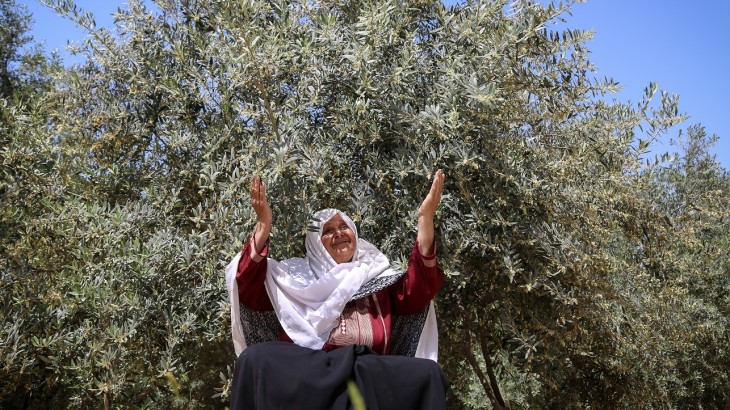 Thurayya Abu Haddaf is a farmer from Qarara, east of Gaza Strip, close to the border with Israel. In conjunction with various conflicts in Gaza, her agricultural lands were ruined several times. Nidal Alwaheidi/ICRC 2017

Christian Cardon, ICRC head of mission in Jerusalem and the West Bank

Jerusalem - I have lived alongside Palestinians at different stages in my life. I have met them in their diaspora and I have lived amidst them in their occupied homelands; Gaza, East Jerusalem and the West Bank. I have seen how they must live their lives, surrounded by restrictions and measures, including checkpoints, movement restrictions, loss of land and home demolishment.

My name is Christian Cardon. I am a humanitarian professional and have spent the last ten years of my life in some of the most volatile places on earth. I am the current head of mission for the ICRC in Jerusalem and the West Bank, previously head of office in Gaza.

The 15 months I spent in Gaza gave me the opportunity to get to know the land and the people, walk through its fields and crops, share meals with farmers on their lands; lands that they were not permitted to access for over ten years; lands that were bulldozed and destroyed by military offensives.

I accompanied mothers and fathers on their long journeys to visit their children in Israeli detention. I spoke to young mothers whose children’s vocabulary included words unimaginable to those of a child in the West. I spent hours on end talking to authorities to facilitate the issuance of permits. Permits for gravely sick patients that needed to leave the confines of Gaza in order to stand a chance of survival. I shook hands with hundreds of people; hope and despair intertwined in their eyes.

I am still haunted by the look I saw on a traumatized child’s face following the heavy rain and floods of 2013 in Gaza. Floods that rendered a frail and battered existence – an existence which is cut off and overshadowed by intermittent conflicts – all the more miserable.

I recall the summer of 2014 in Gaza as one of the most challenging times of my life. The prevailing chaos of the conflict, the screams of the injured and the sounds of explosions are still with me. During 51 days of intense hostilities, my team and I worked around the clock. We evacuated as many civilians as we could, escorted paramedics, repaired damaged water networks and restored destroyed electricity lines.

In July 2015 and while in Jerusalem, a new wave of violence broke out. Ramming, stabbings and bouts of violence meant that everyone was at risk of being in the wrong place, at the wrong time. People were afraid to move around.

The ICRC did not stop its operations. We continued to travel between Jerusalem and our offices in the West Bank.

I had heard about the West Bank barrier but seeing it was another story. Imagine a wall, eight metres high, cutting through the route you take to work every day, or the fields you walk through to see your mother. This is the West Bank barrier. It cuts through entire Palestinian communities, altering their demographic and economic landscape under the umbrella of security. The West Bank barrier and the fast expanding settlements it is meant to shield are affecting the lives and dignity of millions of people

Every individual, amidst these millions of Palestinians, has a story of their own. Each individual has a past, a present, and hopes for a brighter future.

Throughout my years here in the occupied Palestinian territory, I have been in awe of the resilience of Palestinians and their love for life. It is no wonder that the phoenix is the symbol of Gaza’s largest municipality. According to its mayor, Gaza is the phoenix that keeps rising from the ashes.

Palestinians have taught me to keep hope alive, even amidst the darkest times. Looking back at the past 50 years and taking stock of where Palestinians stand today, I can see that that the five decades of occupation is breaking down their hope and resilience.

The start of Ramadan has brought with it a new wave of hope and serenity. The recent suspension of the collective hunger strike and the conclusion of an agreement also gives room for hope. And although cautious in doing so, I remain hopeful.

Fifty years on, hoping for a better tomorrow is not sufficient. Our hopes must be translated into concrete action. Bringing about a long-lasting change in Palestinians’ lives can only occur with a real and sustainable political solution.

I will leave office in two months, a different person, wondering when politicians will have the will to find a lasting solution. Until that happens, the ICRC remains committed to doing all that is within its reach, and in line with its mandate, to alleviate some of the suffering brought about as a result of 50 years of occupation. It is no coincidence that our presence in the Palestinian territory dates back to 1967. Our story is your story.