Yemen: Airstrikes in residential area of Sana’a are outrageous 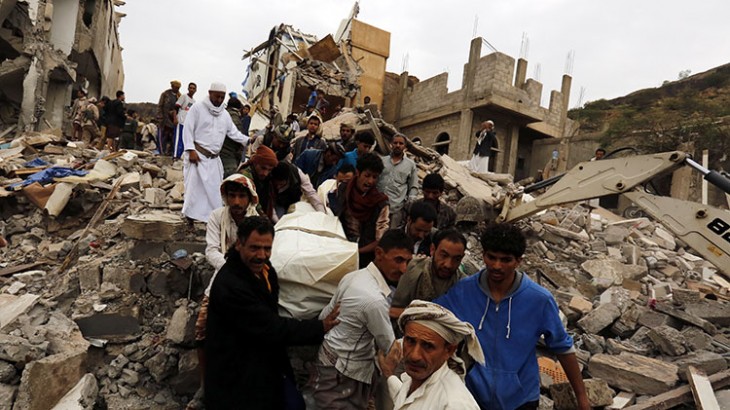 Airstrikes in the city of Sana'a in Yemen have have left 14 dead and injured another 16 people. EPA / Yahya Arhab

The ICRC strongly deplores last night's airstrikes in Sana'a, which killed 14 people and injured another 16. The casualties included at least 5 children, the youngest of them only 3 years old.

"I am deeply shocked and saddened by last night's airstrikes on a residential neighbourhood in Sana'a. Eight of the victims were members of the same family, including five children between 3 and 10 years old. Seven died, while a four-year old girl was injured." said the deputy head of ICRC's delegation in Yemen, Carlos Morazzani, after visiting the site of the attack. "Such loss of civilian life is outrageous and runs counter to the basic tenets of the law of armed conflict."

Faj Attan is a residential neighbourhood in the south of Sana'a where three buildings were hit by airstrikes around 2 am local time. The strikes reduced two of them to rubble, and severely damaged the third one, making the retrieval of bodies and of the injured extremely difficult. "From what we saw on the ground, there was no apparent military target", added Mr. Morazzani.

Yemen Red Crescent Society volunteers responded to the incident and assisted in the transfer of survivors to three hospitals in Sana'a. The ICRC has provided a substantial donation of medical supplies to help treat the wounded.

The bombings come after the ICRC earlier this month expressed public alarm at the increasing trend of airstrikes against civilians in Yemen.

The ICRC reiterates its call on all the parties to the conflict to respect the law of war and spare civilians.