Marco Baldan grabbed the white and red International Committee of the Red Cross flag and strapped it to the side of the simple wooden boat. The four flags fixed to the 60-foot cargo ship will clearly identify the craft as on a humanitarian mission. Destination Aden, Yemen - a city with many casualties but too few surgeons.

Marco, a general surgeon, is leading a team of four ICRC medical personnel into the heart of a war zone even as others who can are fleeing to safer places. Sending medical teams into conflict zones is a core part of what the ICRC does, and Marco, a native of Italy, is not alarmed at the risks.

"I could be killed, but I don't think it will happen. Once I'm there I can play my cards," he said just before setting sail. To a hostile gunman he would say: "Look my friend, I can help you and all the others."

"This is my cup of tea. I've been in these situations so often. I always find that if you follow the security rules you're fine. I always felt safe on all my ICRC assignments," he said. 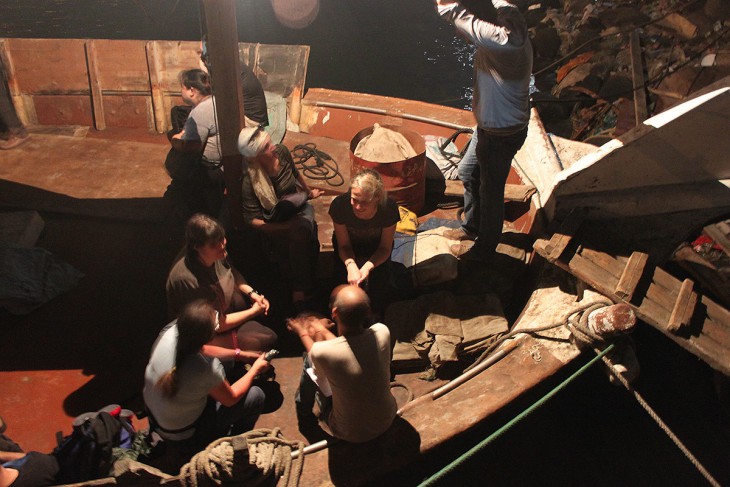 Djibout. The ICRC team on board the boat that will sale to Aden, Yemen. CC BY-NC-ND / ICRC

The medical team boarded the boat late on Tuesday night in Djibouti and set off for the 12-hour trip across the Gulf of Aden. As she waited on the dock, Elin Oddsdottir, an operating theater nurse from Iceland, said she was not afraid. "But I often wonder why not," she said.

Birgitte Gundersen, a post-operative nurse from Norway, said the ICRC has good safety systems in place. "If there is danger then we go in the safe room and then we come out. This is not the first time the ICRC has done this."

Ana Lufinha, an anaesthesiologist from Portugal, said her fear is as much about the task she faces.

"What if there are more patients than we can handle? I hate it when your patient dies. Can I cope with this situation? Are we going to be able to provide the medical care needed?" she said.

"But I still go. I think I have a duty to go. I feel that as a doctor I must help people if I can."

The residents of Aden are being hit hard by intense fighting. Medical expertise and supplies are scarce even as the number of casualties rise. The port city is not new to Marco. He lived there in early 2013, and labelled the seaside location as "interesting but wild." People would come into the emergency room brandishing a gun and begin shouting orders, he said.

Marco's team will work for three weeks -- almost around the clock on busy days -- and then be replaced. Reports from just one Aden hospital speak of more than 200 sick and wounded inside but little advanced surgical skill.

"War trauma, it's a specialism in the sense that bullets or bomb fragments create more damage than we can see with our eyes and it requires an approach that is different from what we learn at medical school," he said. "Nowhere in the world do universities teach surgeons about war trauma injuries."