By entering this website, you consent to the use of technologies, such as cookies and analytics, to customise content, advertising and provide social media features. This will be used to analyse traffic to the website, allowing us to understand visitor preferences and improving our services. Learn more
16 December 2020 16:00 - 17:30

At Buddhism's core is the recognition of suffering and the promotion of means to alleviate it, by challenging our understanding and making changes to our conduct. It has applied these means both to the quest for salvation and to the troubles that afflict society, and has grappled with the reality of war throughout its long history. This suggests a possible convergence of some of the aims of Buddhism and IHL. But what guidance does Buddhism provide to those caught up in the midst of hostilities, and how do Buddhism and IHL compare in this respect? It is timely and relevant to explore these two distinct bodies of ethics and legal traditions from inter-disciplinary perspectives.

This first webinar will introduce the ICRC project on "Reducing Suffering During Conflict: The Interface Between Buddhism and IHL", and feature some of the leading scholars involved, including Prof. Peter Harvey (University of Sunderland, Emeritus), Prof. Asanga Tilakaratne (University of Colombo, Emeritus), Prof. Kate Crosby (King's College London), Dr Sunil Kariyakarawana (Buddhist Chaplain to the UK Armed Forces) and Andrew Bartles-Smith (ICRC). Dr Pyi Kyaw (Dean, Shan State Buddhist University) will moderate. After initial presentations the session will be opened up to questions from attendees.

The event is free and open for the public but registration is required to attend.

To get the Zoom link please register here.

Simultaneous translation of the webinar is offered in Sinhala, Thai, Burmese and Indonesian, and an e-certificate is provided upon request. 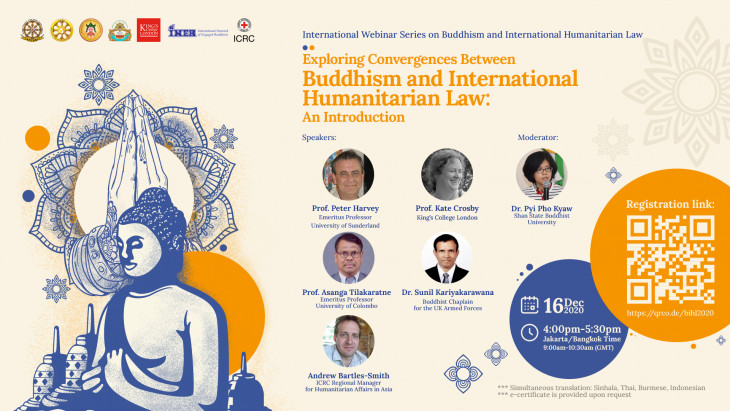