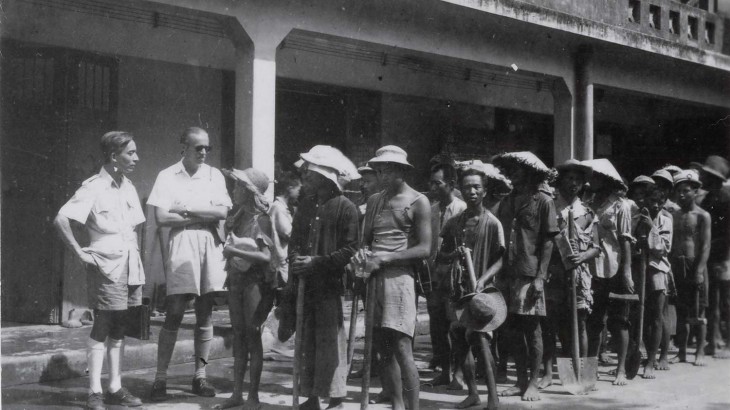 ndochina War, 1946-1954. ICRC and French Red Cross delegates speak with Vietnamese prisoners as they make their way to work at a «Seminary Camp» in Hanoi. © ICRC

At the end of the Second World War, the ICRC finds itself in an ambivalent position. Its humanitarian work during the conflict – in particular in aid of prisoners of war – has been widely commended. However, some countries, particularly in Eastern Europe, are criticizing the organization for not doing enough for the millions of Holocaust victims. Conversely, it was also criticized for dedicating too much time to helping civilians in the defeated countries after the war, particularly in Germany.

The ICRC’s work on behalf of prisoners of war earned the organization international recognition in the form of a Nobel Peace Prize. But the criticisms, together with a very difficult financial situation, needed to be overcome if the organization was to continue to function in the long term.

In response to the gaps in humanitarian law, principally concerning the victims of armed violence, the ICRC embarked on a process of revising and expanding the Geneva Conventions, aiming to avoid a repeat of the horrors of the last war. Four basic texts were subsequently adopted by a Diplomatic Conference in August 1949, one of which explicitly states belligerents’ duties towards civilians.

With a view, as always, to increasing protection of the civilian population, the ICRC became involved at the start of the 1950s in a major debate on ways of prohibiting area bombing and weapons of mass destruction. Hiroshima and Nagasaki were still fresh in everyone’s minds and served as a backdrop to the discussions. Draft Rules for limiting the dangers incurred by the civilian population in times of war were drawn up and submitted to the 19th International Conference of the Red Cross, but unfortunately this came to nothing.

New conflicts and the Cold War

Operationally, in accordance with its mandate, the organization continued to offer its services to alleviate the suffering that had been caused by the world war (providing civilians with aid, repatriating prisoners of war, assisting refugees and the displaced) and also by new conflicts in the Middle East and in India, among others. However, the “outbreak” of the Cold War in 1947 placed the ICRC firmly on the international scene once more, giving it the opportunity to work as a neutral intermediary between East and West. The Greek civil war, the Korean War, the Suez crisis, the Hungarian uprising and the Cuban missile crisis are all examples of occasions on which the ICRC's neutrality was as important as its impartiality.

Moreover, the ICRC found itself dealing with a new type of conflict, with its own characteristics and problems, as territories ruled by European States sought independence. The wars of decolonization affected all Western colonial powers, and would in fact continue beyond the period under consideration. The Dutch East Indies, French Indochina and Algeria, the British Empire in India and in Africa and the Belgian Congo were the main stages for ICRC action. These wars of national liberation would have a profound impact on the organization's modus operandi.

Lastly, the Biafran war would present the ICRC with new problems that needed to be taken into account in the future: competition from other humanitarian organizations, and the increasing media coverage of war.