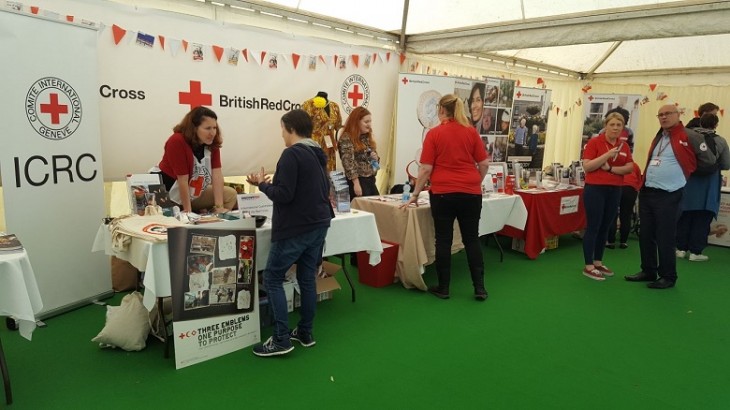 As a reflection of increasing cooperation, staff and volunteers from the Irish Red Cross (IRC), the British Red Cross (BRC) and International Committee of the Red Cross (ICRC) Mission to the UK and Ireland joined forces for an open day in Belfast, Northern Ireland on June 10th 2017.

In a bid to increase more public awareness about the work of the Red Cross both at home and overseas, the event, held on the grounds of Belfast City Hall, featured information stands, first aid demonstrations and live music from Beyond Skin, a Northern Ireland-based band which works to counter racism and sectarianism. Syrian, Sudanese and Tanzanian refugees were amongst the performers. Since December 2015, the British Red Cross in Northern Ireland have assisted over 500 refugees from Syria who have been resettled in Belfast, Derry/Londonderry and other smaller cities.

The ICRC first established its presence in Northern Ireland six years ago, with detention visits and support to community protection groups at the heart of its work.

"We wanted to show how the work of the National Red Crosses and the ICRC is different, yet complementary in addressing the needs of the most vulnerable under the same fundamental principles of independence, neutrality and impartiality. The Red Cross and Red Crescent family is present all over the world and just on this island, you can find 3 of its members working closely as partners in their respective country and internationally as well," said Laure Schneebeerger, ICRC head of office in Belfast. "We thought such an event could be a good opportunity to introduce people to the work of the Red Cross and may be to join us, the ICRC is always interested in discovering new talents and people motivated by humanitarian work."

"We would like more people to know about what the British Red Cross does here in Northern Ireland," said Sharon Sinclair, BRC Country Director. "From our emergency response capability, first aid, refugee services and support for individuals to retain or regain their independence after a personal crisis, we would like to raise our profile and encourage more people from right across Northern Ireland to use our services."

The event, the second of its kind in Belfast, attracted a diverse and sizeable crowd throughout the afternoon. John Roche of the Irish Red Cross said it was important to showcase both the work of the Irish Red Cross overseas but also highlight ongoing cooperation with the BRC in Northern Ireland and the ICRC.  "Events like this allow us to present the wider role of the Red Cross Red Crescent movement to the public. Both from the perspective of our international and local humanitarian work. It also allows us to showcase how the different elements of the movement work together, in line with our fundamental principles of neutrality and impartiality."

To learn more about the ICRC in Northern Ireland, click here: