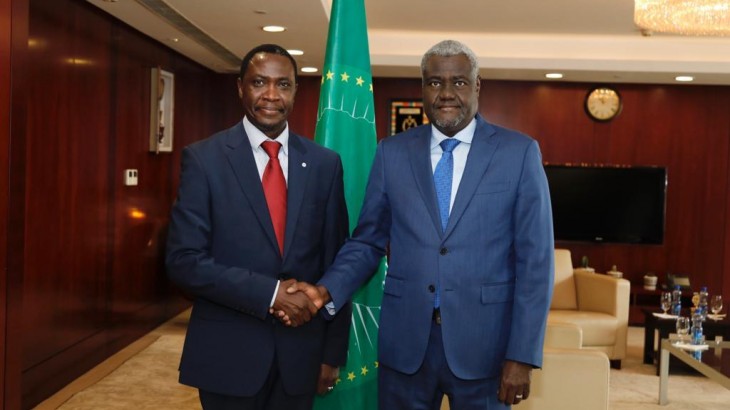 The African Union Commission Chairperson, Mr. Moussa Faki Mahamat, accepted the letter of credentials of Mr. Bruce Mokaya Orina, incoming Head of the ICRC delegation to the African Union, on 5 December 2019, at the AU Headquarters.

H.E. Mr. Moussa Faki Mahamat wished Mr. Bruce Mokaya and his team support in his endeavor. He also said that the African Union lauds the ICRC's humanitarian activities in Africa and its engagement with the African Union at the diplomatic and policy level.

The AUC Chairperson expressed his appreciation for the ICRC's contribution to the AU Theme of the year "2019: "the Year of Refugees, Returnees and IDPs: Towards Durable Solutions to Forced Displacement in Africa". The ICRC has presented its Updated Report of the Stocktaking exercise on the Implementation of the Kampala Convention in Africa. The year 2019 marked ten years since the adoption of the convention, which is the first ever international instrument for the protection of internally displaced persons in Africa.

The ICRC and the African Union have been cooperating on humanitarian issues for 27 years, following a Memorandum of Understanding signed in 1992. The aim of their cooperation framework is to cooperate on humanitarian issues related to victims of armed conflict and other situations of violence, promote a better knowledge, and respect for, international humanitarian law by AU Member States, provide legal support to the AU Commission for the mainstreaming of IHL into decision and policies.

The ICRC strives to tackle various humanitarian issues concerning Africa. Our work is aimed to provide protection and assistance to victims of armed conflict or other situations of violence, including children women, detainees, internally displaced people, refugees and migrants.